'Political correctness is America’s newest form of intolerance, and it is especially pernicious because it comes disguised as tolerance.'

Kelly Carlin, the daughter of the late groundbreaking comedian George Carlin, was asked by the New York Times recently about the 2021 controversy over Dave Chappelle’s Netflix special “The Closer.” Left-wing activists called the special “anti-trans” and “hate speech,” while some Netflix employees even threatened to walk out—and did. An online mob wanted Chappelle’s show removed from Netflix, or “canceled,” evidently believing there was no place in our society for the comedian’s views on transgender issues, a complex subject for many Americans.

Speaking to the Times, the admittedly left-leaning Kelly Carlin wondered if Chappelle’s jokes were funny to those offended. But she also noted that her father “always took the stand that more speech is better than less speech” and would have supported Chappelle’s right to perform the special.

“Is it dangerous when a culture wants to shut people down for speech?” she asked. “I think my dad would say that is dangerous.”

I have long been a fan of George Carlin the comedian. I was a child when cable was new and his 1982 performance at Carnegie Hall was one of my first memories of seeing HBO.

But as an adult, I now believe Carlin’s absolutist free speech advocacy—which defined his entire career—is needed more today than ever before. In an age where mobs believe it is necessary to try to silence people like Chappelle, or Big Tech companies try to regulate and censor political speech, and our government even has the gall to try to establish a “Disinformation Governance Board” to monitor our thoughts, a better understanding of free expression is desperately needed.

Carlin’s legacy is a good place to start.

HBO Max’s new two-part series “George Carlin’s American Dream” spans about four hours, intimately covering his career and personal life. Going straight to Carlin’s own politics, Kelly Carlin said her father was “99 percent progressive.” He roasted conservatives more than liberals overall, particularly in the Reagan era, but one wonders if his questioning of environmentalism and other left-wing pieties would get the Chappelle treatment today.

Slate’s Jason Bailey considers that routine a dark mark on Carlin’s career, writing in a recent column that Carlin thankfully changed with the times, never becoming “whatever it is that Dave Chappelle has become.”

What is that, exactly? Even more famous? Heroic?

The new HBO series documents how Carlin never wavered in his principles. This leaves one to wonder how he might be received by today’s contemporary Left, much of which has become openly antagonistic toward freedom of speech. Or, as Bailey reminds us, “there’s a wide gulf between Carlin’s righteous anti-authoritarianism and the snarling, pants-wetting petulance of today’s ‘free-speech warriors.’”

“Pants-wetting… free-speech warriors.” Framing free speech advocates in such insulting and dismissive terms has become common on the Left.

It's always instructive when corporate journalists leave their jobs and don't have to pretend any more, no longer need to hide what they are and how they think.

This one left the WPost and now he gets to call censorship opponents "whiny free speech piss-babies." https://t.co/GVuckuIIpf

The documentary naturally covers one of Carlin’s most famous acts, the “seven dirty words” controversy in 1972 in which the Supreme Court ruled that Carlin’s profanity could not be broadcast over public airwaves.

Carlin worried at the time about the chilling effect the court’s decision could have on public discourse. He told the Los Angeles Times, “Now everyone is walking around wondering what they can say and censoring themselves, and as a result, lowering the standards of discussion and thought. Thought and discussion depend on language, when you decrease its base then you decrease the base for rational discussion and thought.”

“And that’s what they want to do,” Carlin added.

Throughout the documentary, viewers get to see Carlin’s thoughts or notes animated on a scratchpad. Regarding the Supreme Court’s decision, Carlin wrote, “A reminder: After they have ‘cleaned up’ the content of artistic expression, they will begin to clean up the content of political expression. Maybe then we’ll become concerned.”

Back then, Carlin worried that suppressing artistic speech could lead to the suppression of political speech. Today’s censors go straight to targeting political speech. Until billionaire Elon Musk threatened to buy it, Twitter’s overlords had increasingly started to suppress political speech they disliked by labeling it “disinformation.”

It has had a noticeable effect on what users feel like they are free to say.

Free speech is essential to a functioning democracy.

Do you believe Twitter rigorously adheres to this principle?

Carlin’s examples of defending free speech are many, but the manner in which he gets to the heart of what we would today call “cancel culture,” and he did it four decades ago, is something to behold.

In 1981, he had a simply observational routine about people’s stuff:

“Did you ever notice when you go to somebody else’s house, you never quite feel a hundred percent at home? You know why? No room for your stuff. Somebody else’s stuff is all over the goddamn place! And if you stay overnight, unexpectedly, they give you a little bedroom to sleep in. Bedroom they haven’t used in about eleven years. Someone died in it, eleven years ago. And they haven’t moved any of his stuff! Right next to the bed there’s usually a dresser or a bureau of some kind, and there’s no room for your stuff on it. Somebody else’s shit is on the dresser.

Have you noticed that their stuff is shit and your shit is stuff? God! And you say, ‘Get that shit off of there and let me put my stuff down!’”

Stewart explained, “In essence, it seems like this lighthearted, superficial analysis of, like, the way people value their own belongings and how they display them and those types of things.”

“And it’s just this little bit that he did on shit that you put on your dresser,” Stewart observed.

Not respecting others’ right to create art or express an opinion is problematic for democratic society. The documentary covers the push to censor rock music by the Parents Music Research Center, a collection of politicians’ spouses and others including former Vice President Al Gore’s wife, Tipper Gore.

In a 1985 congressional hearing, Susan Baker, wife of then-Treasury-Secretary James Baker said, “Rock lyrics have turned from ‘I can’t get no satisfaction’ to ‘I’m going to force you at gunpoint to eat me alive.’” (That’s a lyric by the heavy metal band Judas Priest.)

What Baker was essentially saying is that while we have protected free expression in the US, sometimes that freedom can go too far and censors like herself and her friends must step in for the good of society.

Ask an average Democratic voter today if they believe in free speech. They will all likely say yes. But many also wrongly believe “hate speech” is not protected by the First Amendment. Many would also agree that spreading “disinformation” cannot be allowed. Freedom of speech has gone too far and they are going to fix things.

Two decades later, in his 2004 book, When Will Jesus Bring the Porkchops, Carlin wrote, “Political correctness is America’s newest form of intolerance, and it is especially pernicious because it comes disguised as tolerance.”

He added, “It presents itself as fairness, yet attempts to restrict and control people’s language with strict codes and rigid rules.”

One thing “George Carlin’s American Dream” taught me that I did not know is where the comedian’s unyielding love of free speech and thought came from—immense respect for the individual and a deep distrust for the collective. He was dead set against mob mentality.

Carlin told PBS host Charlie Rose in a 1996 interview, “I love people as I meet them one by one. People are just wonderful as individuals. You can see the whole universe in their eyes if you look carefully.” 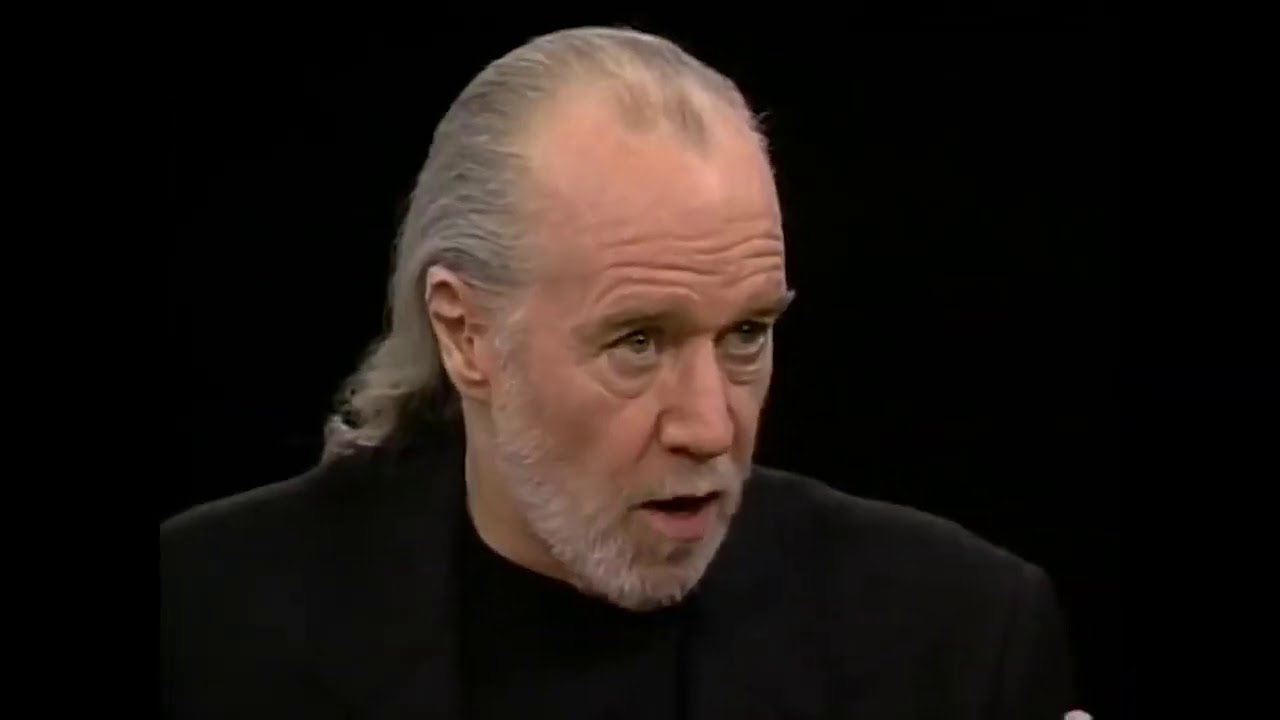 He added, “They sacrifice the beauty of the individual for the sake of the group.”

What is a primary determining factor by the increasingly censorious religious Left today in who it should punish? Individuals who offend a coveted group—challenging transgender orthodoxy, for example—must be silenced for their sin. Identity politics has largely replaced respecting individual diversity on the Left, where the older liberalism of Carlin is becoming a memory at best.

Funniness aside, it’s not good. Free speech in America is getting closer to critical condition than not. It’s going to take individuals like Dave Chappelle and future George Carlins to beat back the mob and save it.