The Department of Homeland Security Just Smeared Americans Who Question Government on COVID, Elections as a ‘Terrorism Threat’ 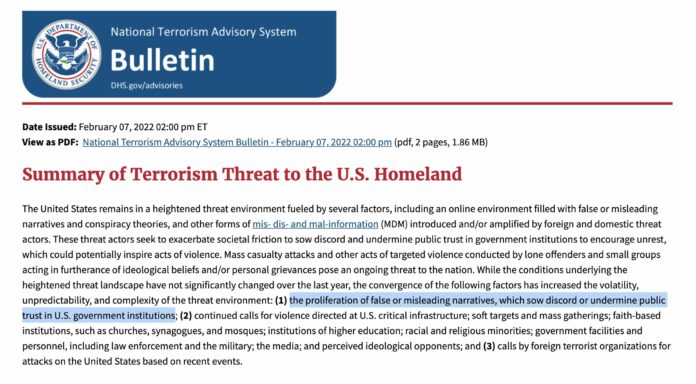 If you question the government, you might be a terrorist threat. At least, that’s what the US Department of Homeland Security just suggested in a new National Terrorism Advisory System Bulletin.

The DHS statement warned against a heightened terrorist threat environment they blame on several factors, including “the proliferation of false or misleading narratives, which sow discord or undermine public trust in U.S. government institutions.” For examples of such terrorism-fueling, dangerous speech the DHS cited “widespread online proliferation of false or misleading narratives regarding unsubstantiated widespread election fraud and COVID-19.”

Also among the supposed causes of terrorism? An “online environment filled with false or misleading narratives and conspiracy theories, and other forms of mis- dis- and mal-information (MDM) introduced and/or amplified by foreign and domestic threat actors.”

The advisory warned that “These threat actors seek to exacerbate societal friction to sow discord and undermine public trust in government institutions to encourage unrest, which could potentially inspire acts of violence. Mass casualty attacks and other acts of targeted violence conducted by lone offenders and small groups acting in furtherance of ideological beliefs and/or personal grievances pose an ongoing threat to the nation.”

Sounds pretty scary. So who are these actors we should be on guard against? Um, literally you. Anyone who “sow(s) discord or undermine(s) public trust in U.S. government institutions” is officially considered a threat to the nation, according to this statement.

You are now officially a "terrorism threat" if you share "misleading narratives, which sow discord or undermine public trust in U.S. government institutions."

Frankly, this DHS statement is a more real and pressing threat to most Americans than terrible but extremely, extremely rare terrorist attacks.

Throughout our history, the US government has used its agencies to label individuals as terrorists and a threat. This label is often a pretext used to then undermine their work, stalk them, threaten them, and many believe, even kill them. One need look no further back in history than how the federal government grossly mistreated Martin Luther King, Jr. to find evidence of that.

For the record, anyone in their right mind is questioning US government institutions at this point.

They have unconstitutionally spied on all of us, stripped us of due process, trampled on our economic freedom, and shielded themselves from liability through qualified immunity. They’ve shut down our businesses and our schools, taken away our livelihoods, and used our taxes to further unjust wars and pad the pockets of their friends. Now, they want to label you a terrorist if you acknowledge what is being done to you.

Moreover, painting criticism, ideas, and theories as a threat to safety is always the first way oppressive governments set the stage to attack free speech.

It’s the oldest trick in the book, but it should enrage you nonetheless.