More than $155 billion is set to be forgiven.

President Biden’s unilateral attempt to “cancel,” aka make taxpayers pay off, $10,000-$20,000 in student loan debt per borrower keeps getting tied up in the courts (blatantly unconstitutional policy has a way of doing that.) With his main relief initiative running up against red tape, Biden is reportedly considering extending the COVID “emergency” pause on student debt payments that’s currently set to expire on December 31.

The “pause” was initially enacted in March 2020 by the Trump administration in order to give borrowers some breathing room with the economy in free-fall. The “temporary” measure has since been extended time and time again, now in place for 33 months. The “pause” is also a form of outright debt forgiveness, because it not only relieves borrowers of the obligation to make their payments but actually forgives the interest payments altogether.

This means that, thanks to inflation and interest, more than $155 billion is set to be forgiven via the current pause—with the biggest beneficiaries actually being doctors and lawyers, according to the nonpartisan Committee for a Responsible Federal Budget (CRFB). 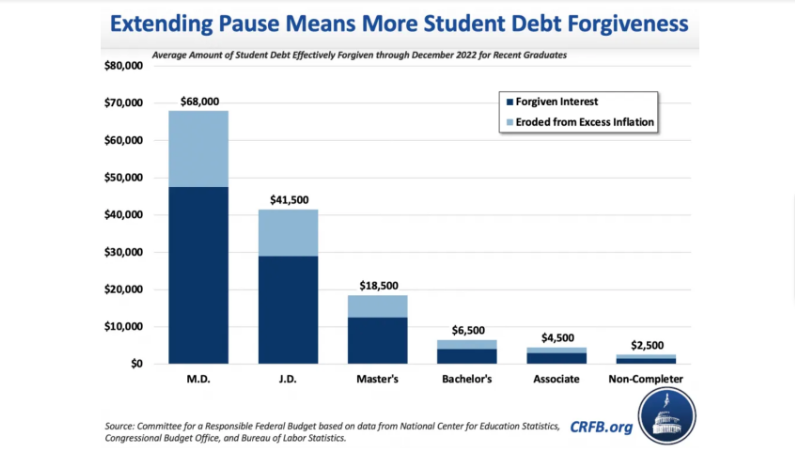 If Biden extends it yet again, it’ll cost taxpayers another $120 billion while “worsening inflation” and “increasing recession risk,” the Committee now reports.

“With inflation at a 40-year high and unemployment near historic lows, there is absolutely no justification for extending the student debt pause yet again,” CRFB president Maya MacGuineas said in a statement. “The pause was put in place as an emergency measure early in the pandemic. As the President has repeatedly pointed out, the pandemic recession is long over.”

“This Administration has been on a reckless borrowing binge – they should not continue on this dangerous path as debt and inflation continue to plague the economy,” she concluded.

This is all true.

The pause probably made sense all the way back in 2020, when people’s jobs were in jeopardy amid crushing economic lockdowns. But the unemployment rate for college graduates is now below 2%. College grads have more than recovered from the pandemic and are more than capable of resuming their payments. So why are taxpayers still eating the cost of their loans?

It will be a slap in the face to hardworking Americans if Biden further extends this policy that mostly benefits the elite at all of our expense.