This has brought a sense of justice for many.

Over the past couple of years, a fight over facts has been brewing.

Social media companies and the mainstream media have partnered with “independent” fact-checkers to evaluate the accuracy of posts online. The results have led to people being censored, having their platforms locked or removed, and ironically, a lot of confusion and turf wars over “the truth.”

The problem is these “independent” fact-checkers tend to be pretty much in lock-step with the Left and whatever the dominant narrative is of the moment. Rather than acting as actual investigators, they instead usually act as the PC police or shills for the establishment—which has quite obviously created a lot of animosity towards their role in society, not to mention a disregard for their opinions.

Part of this is because, as AllSides reports, the vast majority of the people doing the fact-checking belong on the Left-to-center component of the political axis. And if you know nothing of cognitive bias know this: one must work very hard against their brain’s own preconceived notions to overcome them.

Quite simply, the only way to overcome such biases consistently would be to ensure multiple people from different viewpoints were making decisions together.

Unfortunately, it does not seem most in this camp have been doing that work. Not only have they shown a proclivity to incorrectly mark conservative viewpoints as incorrect, they also rarely fact-check their own side—no matter how egregious the error.

But the times, they are a-changin’. This week, after Elon Musk’s purchase of Twitter, the platform began running fact-checks under posts by the White House and even President Joe Biden himself. 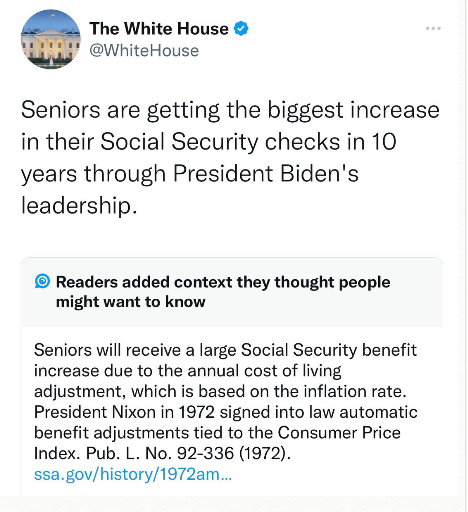 Let me give you the facts.

My Inflation Reduction Act puts an end to this.

As one can imagine, these actions sparked joy for many of us who are sick of the Biden administration’s gaslighting on economic fronts where they are easily debunked.

It also brought a sense of justice to people like me who’ve found themselves in the crosshairs of this debate.

It’s one thing to have a piece of information you share unfairly marked as “disinformation.” I have been a victim of this phenomenon more than once. I’ve even had to send both Facebook and Linkedin numerous reports and data to back up something I posted on occasion in order to prevent my account from being dinged by their algorithm after a fact-checker got it wrong on one of my posts.

This is a frustrating experience in the best of times, and even then it carries the threat of having your profile (and therefore influence) removed—even though you’ve done nothing wrong. But ultimately, this kind of censorship leads to a lack of information for whole subsets of the population, and support for really bad ideas that flow from that ignorance.

Take this recent, ridiculous op-ed in The Atlantic where writer Emily Oster pleads for a “COVID amnesty.” In it, she cops to the fact that those on the Left (who were most likely to side with the policies and plans of COVID, Inc.) got it wrong on everything from school closures, to cloth masks, to the vaccines. But she claims forgiveness should be shown for these massive, life-shifting errors because we did not have all the information back then.

Except… we did. Many of us, intentionally working to educate ourselves and seeking data outside of our bubble, had all the information we needed after a few weeks of the pandemic. Some of us got it right at every turn. The reason that people like Emily Oster did not see that information, and therefore majorly screwed up, is in large-part because fact-checkers, the government, social media companies, and the mainstream media all worked overtime to censor, ban, and persecute anyone who attempted to share it.

As a result of this our economy is in shambles and will only get worse. Millions lost their lives, their jobs, their businesses, everything they own. Children lost years in education they’ll never make up. Gains against child poverty and world hunger were reversed. People died alone. Families were broken apart. The list goes on.

In politics, bias will always be present. And if any of us choose to just listen to people who think like us we will get it wrong on really big things. We don’t need fact checkers to fight misinformation. We need more information, more voices, more data, and to let people come to their own conclusions.

Thus far, Elon seems to be hitting the mark. Twitter’s new fact checks are sourced, explain the error in detail, and leave the original post up for viewers to read and make their own decision on.

But worth noting is the fact that the White House removed its fact-checked post after the fact – thus displaying the true power of free speech when it’s used to speak truth to power (versus censor information that counters one’s preconceived notions.

The White House was spewing propaganda that was easily disproved by anyone with a basic Econ 101 understanding. When confronted with the possibility of having to defend their hot air, it apparently quickly took the wind out of their sails.

That’s the kind of fact-checking we can get behind.