Her career was built with the bricks of injustice, misfortune, and feeding the prison-industrial complex.

First: I’m pardoning all prior federal offenses of simple marijuana possession. There are thousands of people who were previously convicted of simple possession who may be denied employment, housing, or educational opportunities as a result. My pardon will remove this burden.

Third: We classify marijuana at the same level as heroin – and more serious than fentanyl. It makes no sense. I’m asking @SecBecerra and the Attorney General to initiate the process of reviewing how marijuana is scheduled under federal law.

Sending people to jail for possessing marijuana has upended too many lives – for conduct that is legal in many states. That’s before you address the clear racial disparities around prosecution and conviction. Today, we begin to right these wrongs.

This was excellent news for anyone who believes in individual liberty, limited government, free markets, and just basic common sense.

But while the news received thunderous applause, much of the internet was simultaneously casting a side eye in the direction of Vice-President Kamala Harris. 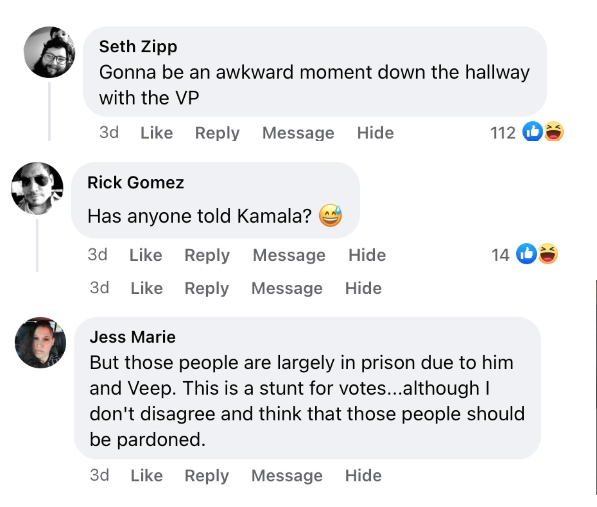 While, as mentioned, Biden bears his own share of hypocrisy on this subject, his record pales in comparison to that of his VP’s, who spent the better part of her career actively locking people up for drug offenses.

As I’ve previously pointed out, Harris’ career ascension was built with the bricks of injustice, misfortune, and the corruption of the prison-industrial complex. Her trajectory to the White House followed one typical of those on the prosecutorial to power pipeline – she began as a prosecutor, became a District Attorney, then moved onto Attorney General.

In each of these capacities, she worked diligently to enforce the nation’s drug war.

Worth mentioning here is the vast leeway prosecutors, DAs, and AGs all enjoy in determining which crimes to prosecute and what punishments to seek. In all of her roles, Harris had the option to act as a check and balance against corrupt drug laws and nullify them by refusing to waste resources prosecuting these crimes. Instead, she gladly threw people in cages to advance her own career.

Harris actually ran for District Attorney as a “reform” prosecutor, promising to never seek the death penalty, but she quickly changed her tune once in office – actually working to increase penalties and implement harsher sentences. During her tenure, reviews of drug crimes actually increased a whopping 25% and she even sought to block people from drug diversion programs. (Diversion programs work to ensure people caught up in the system over drug offenses get the treatment and rehabilitation they need. That means they not only work to address the real underlying problem, they also save taxpayer dollars on incarceration, keep families together, and keep individuals working).

Ultimately, according to Politifact, “there were 1,883 admissions to state prison on marijuana offenses during the years Harris was attorney general.”

But now? Kamala says that “nobody should have to go to jail for smoking weed.”

When you stand for absolutely nothing but your own success.

I mean, we agree. But it’s pretty gross to watch someone so complicit in the destruction of thousands of lives now brush off that fact and pretend she’s always held the rational position.

No one should be in jail for consuming any drugs, period. Addiction should be treated as the health crisis that it is and our public resources should go only towards solving and punishing real crimes. As for politicians like Biden and Harris, arriving at the right position is better late than never. But they owe a lot more than solidarity to the communities and individuals they devastated with their bad ideas.