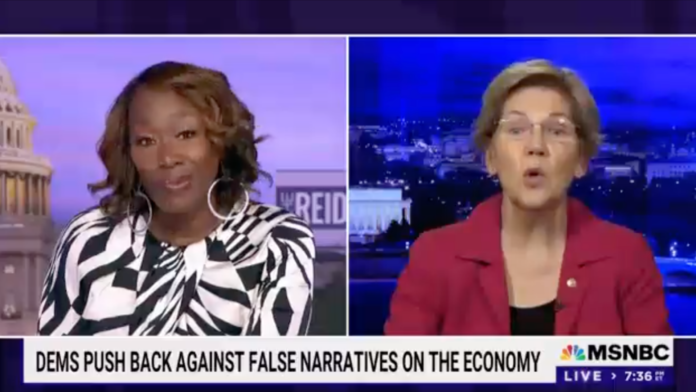 Economists are a notoriously fickle bunch, and vary across a wide ideological spectrum. Yet the Democratic Party’s current narrative on inflation is so far-fetched that most economists can’t help but agree on its absurdity.

At least, that’s the finding of a new IGM Chicago survey. They polled a sample of top economists and asked them to evaluate the claims made by many elected Democrats about inflation. Figures from President Biden to Senator Elizabeth Warren have, in one form or another, blamed “corporate greed” and market concentration for the ongoing surge in consumer prices that’s hurting American families. They’ve also touted antitrust policies—the federal government  breaking up large corporations into smaller businesses—as a supposed “solution” to surging prices.

Prices at the pump have gone up. Why? Because giant oil companies like @Chevron and @ExxonMobil enjoy doubling their profits. This isn't about inflation. This is about price gouging for these guys & we need to call them out. pic.twitter.com/kxiQkC2tYa

What happens when only a handful of giant grocery store chains like @Kroger dominate an industry? They can force high food prices onto Americans while raking in record profits. We need to strengthen our antitrust laws to break up giant corporations and lower prices. pic.twitter.com/DMa9Z7adFr

The economists surveyed by IGM Chicago almost all dismissed this out of hand.

They were asked whether “dominant corporations in uncompetitive markets taking advantage of their market power to raise prices in order to increase their profit margins” was a “significant factor” behind the current inflation. Weighted for confidence, 79 percent of the economists said it was not.

“I don’t see the logic,” MIT economist David Autor said. “U.S. markets have been concentrating for decades but high inflation is [less than] one year old.”

So, too, the surveyed economists dismissed the idea of anti-trust as an inflation solution. Again weighed for confidence, 84 percent said antitrust enforcement could not successfully reduce US inflation over the next 12 months.

If anything, it could have a small effect in the opposite direction!

“Many interventions are on behalf of high-cost disappointed rivals,” Stanford economist Robert Hall explained. “So the interventions tend to raise prices.”

Unfortunately, a majority of Democratic voters have fallen for their leaders’ ruse. Polling shows 63 percent believe the false line about corporate power being the culprit behind ongoing inflation problems.

Meanwhile: more than half (54%) of voters say large companies having little competition is responsible for rising inflation.
That figure is higher among Democrats at 63%, but nearly half of Republicans (47 percent) said the same. https://t.co/3TurVFkPW8 pic.twitter.com/AJKW2Pocba

This is what happens when cynical politicians push economic illiteracy to avoid the blame for their own government’s actions. The real reason inflation is out of control is reckless federal deficit spending and rampant money-printing by the Federal Reserve.

Here’s hoping more Americans see through the Democrats’ sad deflection attempts and realize that their inflation narrative has no basis in economics.