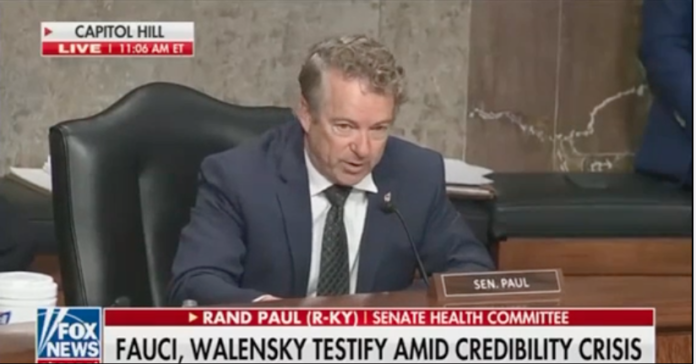 As has become custom in our post-COVID politics, the Senate Committee on Health, Education, Labor & Pensions held a hearing this week featuring Dr. Anthony Fauci (Director of the National Institute of Allergy and Infectious Diseases) and Dr. Rochelle Walensky (Director of the Centers for Communicable Diseases).

As is also customary, the two spent the bulk of the hearing gaslighting the American people with revisionist history in which their central planning allegedly worked to keep people safe and had no negative repercussions.

For the record, it has not. 838,000 people have died, many of them due to government policies that sent sick people back into nursing homes or prevented ambulances from taking patients to overflow hospitals. Hospitals fired perfectly healthy nurses and other staff, creating shortages at care centers, thanks to the Biden administration’s vaccine mandate. And the fallout from lockdowns and the government’s rules for managing COVID have led to disruptions in the job market, the supply chain, and even our money.

.@RandPaul to Fauci: "[T]he idea that a government official like yourself would claim unilaterally to represent science and that any criticism of you would be considered a criticism of science itself is quite dangerous…It is cheap politics & it is reprehensible." pic.twitter.com/b6JCaaHQTR

Most of us watching from our living rooms were not having this remix of the narrative by Fauci and Walensky, and thankfully, neither was US Senator Rand Paul (R, KY)—who was fortunately in the room and capable of voicing what most people were thinking.

Paul’s run-ins with Fauci have become infamous over the past two years. He has often been one of the only people to hold the unelected bureaucrat’s feet to the fire, and inevitably, he has been proven right in each of their encounters (though you’ll never hear his detractors come back and admit it).

To begin his line of questioning, Paul referred to recent comments where Fauci claimed he was synonymous with science. Appearing on CBS’ “Face the Nation,” in November of 2021, Fauci claimed Republican lawmakers who criticized him were “criticizing science, because I represent science.” (oof.)

“A planner who believes he is the science leads to an arrogance that justifies in his mind using government resources to smear and to destroy the reputations of other scientists who disagree with him,” Paul said to Fauci. “Do you think it’s appropriate to use your $420,000 salary to attack scientists that disagree with you?”

Paul then read the receipts, in which Fauci worked with another colleague via email to “‘create a quick and devastating published takedown’” of three prominent epidemiologists from Harvard, Oxford and Stanford,” according to reporting from Fox News. The Daily Mail also reported on those emails.

Fauci responded with a complete meltdown of a tangent, in which he claimed Paul’s criticism of him was endangering his life. Never mind the fact that Sen. Paul has endured three actual attacks on his life in recent years (once by a neighbor, once by a gunman at a Congressional baseball game, and once by a mob outside the Capitol during Black Lives Matter protests).

“What happens when he gets out and accuses me of things that are completely untrue, is that all of a sudden that kindles the crazies out there and I have threats upon my life, harassment of my family, and my children, with obscene phone calls because people are lying about me,” whined Fauci.

Shortly thereafter, he actually held up this photo—creating this gem of an internet meme below. 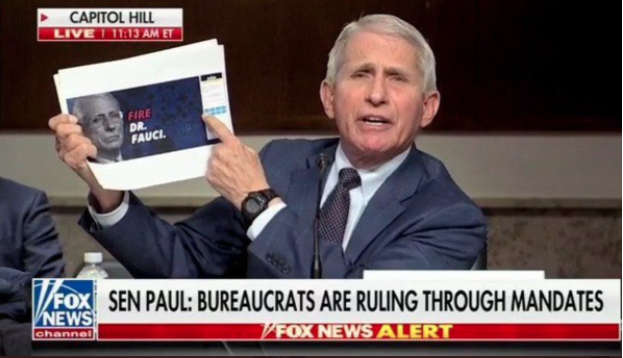 Fauci clearly thinks he is above reproach, and it’s no wonder considering the fact that few have asked him to answer for his arrogance or for his numerous failures.

But his behavior is inexcusable and immature. The American people deserve answers.

Thankfully, at least one senator is trying to get them.