But over the years, I’ve had to disentangle my pride in my family’s work ethic and character, which so closely align with the American ideals I was taught and still vigorously believe in, from our government itself. 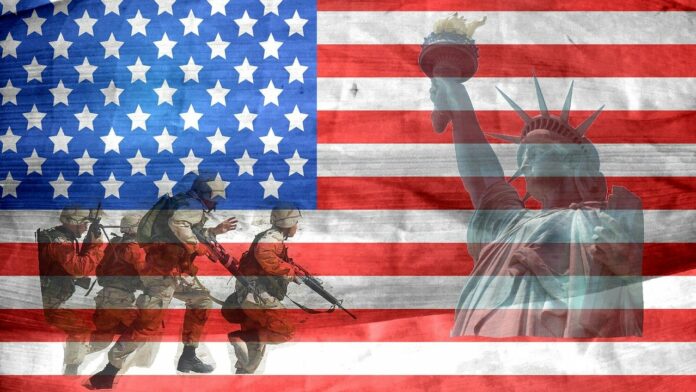 The Fourth of July was always a big deal in my family. Most years, we traveled back “home” to Alabama for a large family gathering at my Aunt Linda’s house. When I was very young, the highlight of the day came at the end when we would head to the Oxford Lake (which I must emphasize was actually a pond) and watch fireworks the local fire department set off over it. My Uncle Dennis was one of those firemen, and I took such pride in knowing one of my relatives was responsible for that magical display.

As I aged, that same pride always coursed through me on this holiday. In analyzing it in hindsight, so much of my pride in my country was entwined with pride in my family, who I think to this day embody the American Dream.

I come from humble roots. My Dad’s father had an eighth-grade education and worked in a pipe factory to provide for his family. They were poor, even hunting opossum to eat at times, but he always met their needs and gave them a solid upbringing. When he graduated, my Dad became the first person in his family to go to college —working multiple jobs and running track, which he hated, on scholarship to put himself through.

My mom’s parents were similarly poor. That grandfather went to college on a GI Bill scholarship, attending in the evenings while he worked to provide for his young wife and three daughters. He went on to build a successful career in the grocery business, owning a chain of stores in Alabama that my parents met while working in.

There are countless other stories like this in my family tree. Stand-up people of character, working hard and taking advantage of the opportunities afforded to them in this country—slowly building a better life for the generation that comes after them. I’m proud of them, and thankful to live in a country where those stories have been possible.

But over the years, I’ve had to disentangle my pride in my family’s work ethic and character, which so closely align with the American ideals I was taught and still vigorously believe in, from our government itself. It would be easy to bury my head in the sand and lean into blind nationalism. There’s no question this country has greatly benefitted me and my family. But I now know that all Americans are not given the same opportunities or treated equally under the law. For that and many other offenses, it would also be easy to curse a country whose government has done so much wrong and seek to burn it all down.

For the latter, the US receives a great deal of scrutiny and condemnation, both globally and at home. And I would agree that rebuke is deserved. But I always find it odd that America alone is criticized for injustices such as slavery, racism, inequality, and civil rights violations. It’s as if the vast majority of people are truly under the impression these injustices only ever happened here. [wpdiscuz-feedback id=”e3wyh4z7vi” question=”What are your thoughts on this?” opened=”0″][/wpdiscuz-feedback]

In truth, the entirety of human history is marred by these evils, and in many places, you’ll find much worse conditions for civil liberties to this day.

The US is criticized more heavily for its failures to uphold human rights because it was the first to come along and allege that we had them. Therefore, its hypocrisy when it fails to live up to the values it professes makes those failures all the more glaring. And again, I’m not coming to the government’s defense. I merely want to point out that before the US, poverty, inequality, indentured servitude, slavery, racism—all of these evils and more were the status quo, and no one really expected differently.

When we said, “We hold these truths to be self-evident, that all men are created equal,” the reality is that this principle had been self-evident to practically no one throughout thousands of years of history. When we said that all men are “endowed by their Creator with certain unalienable Rights,” it got people’s attention, and suddenly others began to agree. When we said humans are entitled to “Life, Liberty and the pursuit of Happiness,” it became a violation to impede such things. But make no mistake. These notions were not mainstream when our founders threw down the gauntlet with the Declaration of Independence.

And the preponderance of those views we now enjoy throughout large parts of the world belies just how fringe they once were. The founding of the US turned the world upside down—not because we eradicated injustice with these words, but because by alleging them we created a new standard by which governments and countries are now judged.

We have always failed to live up to our ideals, there’s no denying that. But we keep alleging them. We keep striving for them. And our history is filled with other extremists who have sought to continue the work our founders began.

We went to war with ourselves to uphold these views. Thousands of our fellow citizens have died to ensure others continue to have a shot at the world we proclaim to be possible. Americans like Edward Snowden and even citizens of other countries like Julian Assange have given up their liberty to protect these ideals. Many of these names you will never know. But we are surrounded by common, everyday American heroes who continue to risk their lives, their liberty, their fortunes, and their names for the sake of the radical ideas written down in our constitution.

As Barry Goldwater once said, “Extremism in the defense of liberty is no vice, and moderation in the pursuit of justice is no virtue.”

Nowadays, this is where I find pride in my country—in knowing there are so many other “extremists” defending liberty and pursuing justice. America may never truly live up to the values we proclaim, but if we do, it will be because the extremists persisted in the face of improbable odds.