California police stole $17,000 from these sisters

Civil asset forfeiture is so unethical that most people won’t believe it’s true.

Did you know police steal more from Americans every year than burglars do?

Civil asset forfeiture (CAF) is a legal practice so bad and so unethical that most people won’t believe it’s true until they read up on it. But under this system, police are allowed to take your property if they even just suspect you of a crime (No, not charge you with a crime. No, not convict you for a crime. Suspect). And they basically just get to keep it unless you have the ability (i.e. the funds) to challenge them in court and prove your innocence.

It’s a total perversion of our Constitution, which is supposed to ensure individuals are innocent until proven guilty and which places the burden of that proof on the accuser (the state).

Recently, Vera and Apollonia Ward had a run-in with the CAF system. The women run a successful dog-breeding business and sent $17,500 via Fedex to purchase two additional dogs. But the San Joaquin County Sheriff’s Office seized the funds and accused the women of drug-trafficking. Never mind the fact that they had all the documentation needed to back-up their story, never mind the fact that police had no evidence whatsoever of their involvement in the drug-market.

“To me, it felt like being treated like a criminal, even though you’re not, it makes you question everything,” Vera said. “They tried their hardest to intimidate us, and to say that we’re basically putting our freedom on the line: ‘Give us this money, we’ll make it go away—or put your freedom on the line for it,” Vera continued.

But the women wanted to fight. Fortunately, they got in touch with pro-bono, constitutional litigators at the Goldwater Institute in Arizona who agreed to take on their case. And within a few months, the government had to return the money.

But this is their game. Police regularly use CAF to bully people out of their money and other property, and they mostly get away with it because (without pro-bono attorneys) the average person can’t afford to fight the government. The government has endless, tax-payer funded resources at its disposal, and its attorneys can easily run up the clock for those attempting to pay a defense attorney by the hour to get their money back. Police then get to keep these funds and add them to their budget much of the time.

CAF is not only a disgustingly unconstitutional law, it also leads to really corrupt police behavior. When police get to profit off the property they discover on people just because they merely suspect them of a crime, they are far more apt to behave like road pirates—targeting and profiling certain kinds of cars and finding reasons to search people and their cars. They should be focusing their time on solving and preventing violent crimes, but instead, we see a vast amount of their resources go to these endeavors instead.

All of this, unsurprisingly, traces back to the War on Drugs. Politicians and police argue that police need this authority to stop high-profile drug lords and their drug trafficking operations. It’s a bogus argument of course. The vast majority of these seizures were for less than $1000 and against people who were never even charged with a crime. 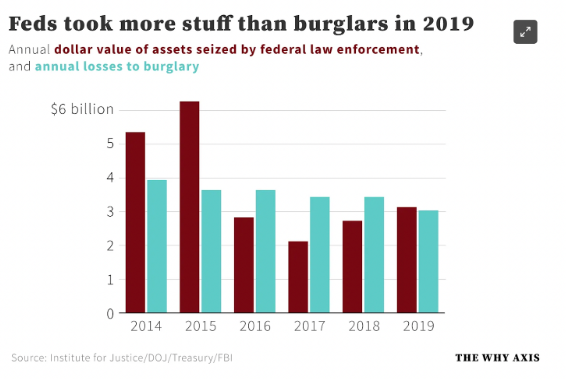 Bottom line, police should never be able to take a person’s property until they have been convicted of a crime. There’s really no ethical or constitutional if, ands, or buts about it. CAF needs to be outlawed at both the federal and state level, and you should pay close attention to the police, District Attorneys, and other politicians that benefit from this system working to keep it in place.

Litigators at places like The GoldWater Institute are heroes fighting the bad guys. Ironically, that’s what we pay the police to do.