We need answers on how these alleged unhinged practices may have harmed us all.

Working in US politics is kind of like navigating a ship through the open sea in Greenland. The place is littered with icebergs of corruption, each of which only gets worse when you look beneath the surface, each posing a threat to our very existence.

For many of us, COVID-19 has revealed an entirely new corrupt iceberg in the field: the government-funded science community. This week, we got yet another glimpse at just how far down this thing goes.

Researchers at Boston University’s National Emerging Infectious Diseases Laboratories (NEIDL) released a paper a few days ago in which they explained how they created a hybrid version of SARS-CoV-2 (the virus behind COVID-19). The scientists experimented on lab mice and exposed them to their new samples, during which 80% of the mice died. That means the new virus was more deadly to the mice than the Omicron variant of the disease, yet not as deadly as the OG virus strain of 2020.

The story was picked up by the Daily Mail whose headline read, “Experts slam Boston lab where scientists have created a new deadly Covid strain with an 80% kill rate.”

This, quite understandably, generated mass outrage from the general public and other outlets quickly picked up the story.

JUST IN – US researchers at Boston University have developed a new lethal Covid mutant strain in a laboratory – echoing the type of experiments many fear started the pandemic. https://t.co/T5JGXnMg4z

I'm telling you these people are not humans.

Scientists at Boston University are under fire for taking multiple COVID strains and creating a reportedly deadlier strain. https://t.co/BaHwiV8fTK

As we’ve been hot on the tail of reporting on – it increasingly looks like agencies within the US government (NIAID and NIH) funded animal experiments that led to the pandemic. The scientists within these organizations, like Dr. Anthony Fauci, gave taxpayer dollars to a nonprofit called EcoHealth Alliance to carry out gain of function research (which was banned until 2017). EcoHealth seems to have spent that money carrying out this kind of dangerous (and torturous) animal experimentation in the Wuhan Lab of Virology, where many believe COVID-19 leaked from. All of these groups then carried out a campaign to hide these facts and label lab leak theories as conspiracies in the early days of the pandemic.

We still need many more investigations into all of this. But one thing is certain, there is no excuse for these practices to continue – period – but especially not before we’ve determined the origins of COVID-19 and how to prevent another pandemic like it. So people were rightfully outraged that Boston University was playing with the very fire we’ve been scrutinizing these government arsonists for.

But what came next got even more sus.

The PR department within the University released a statement seeking to absolve its team from wrong-doing and likely public backlash.

They’ve sensationalized the message, they misrepresent the study and its goals in its entirety,” said Ronald B. Corley, NEIDL director and BU Chobanian & Avedisian School of Medicine chair of microbiology, in The Brink (a publication run by BU’s Marketing & Communications office).

They went on to claim that the research was approved by BU’s Institutional Biosafety Committee and the Boston Public Health Commission.

“This research is not gain-of-function research, meaning it did not amplify the Washington state SARS-CoV-2 virus strain or make it more dangerous. In fact, this research made the virus replicate less dangerous, “ the statement continued.

Notably, the NIH and others in government have worked hard to move the needle on the definition of “gain of function research” since their role in all this has increasingly come to light. As Senator Rand Paul has pointed out, “The NIH is effectively moving the goalposts and arguing that any experiment that combines an unknown virus with a known pathogen such as the SARS coronavirus (15% mortality) is not gain-of-function because the experimenters do not know yet whether the recombinant virus will be enhanced.”

That seems to be exactly what the team at BU is attempting to do in their statement as well. “The animal model that was used was a particular type of mouse that is highly susceptible, and 80 to 100 percent of the infected mice succumb to disease from the original strain, the so-called Washington strain,” says Corley. “Whereas Omicron causes a very mild disease in these animals.” Corley went on to emphasize that the results do not pertain to humans.

Aside from the quibbling over whether or not their experiments constitute gain of function research (and which definition we’re currently using), the University stepped into it even further by attempting to deny the source of its funding for the research.

The NIAID, which was quickly brought into the story due to its funding of the BU department responsible for the research, worked to distance itself from the experiments.

According to Boston.com, “Emily Erbelding, director of NIAID’s division of microbiology and infectious diseases, said in an interview with STAT that BU’s original grant applications did not clarify that this specific work would be done.”

They also report that “The University also did not make it clear to NIAID that its experiments could involve enhancing a pathogen of pandemic potential in progress reports to government officials, STAT reported. In her interview, Erbelding added that she and her colleagues wished BU would have informed NIAID of their intention to do this research.”

And what did BU have to say for that? Always ready with a dodgeball answer it seems, the University tried to claim that while NIAID does fund much of its overhead, money from the agency did not fund this exact experiment.

By the way, here they are specifically crediting NIAID in the research. 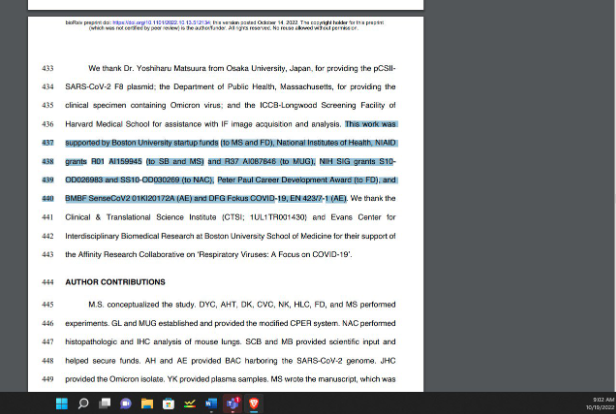 For those who’ve been following the mad scientists in and connected to our government for long, along with their risky and abusive animal testing practices, this line of argument is a familiar one. In fact, it’s the exact same approach researchers tried to claim back when Beaglegate first broke (an explosive story that revealed Fauci’s tortuous experiments on puppies).

Members of the scientific community used to be non-partisan and some of the most respected and trusted members of society. These days it seems they are instead leeches sucking the public’s blood and carrying out scientific experiments as ill-advised as that former treatment.

We need a moratorium on gain of function research. We need to ban these government scientists from animal experimentation. And we need to demand answers into the ways their unhinged practices may have harmed, and will continue to harm, us all.

Hannah Cox is a fellow at White Coast Waste Project.