Here’s how it might have looked if today’s ‘fact checkers’ had been able to censor speech throughout U.S. history

Last week my friend and BASEDPolitics colleague Hannah Cox criticized Facebook’s “fact checkers” for labeling her posts about the IRS hiring thousands of new agents and targeting the middle class as “missing context.” 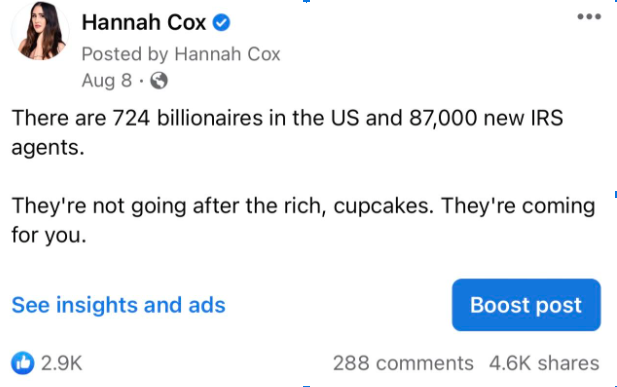 What context had Hannah missed? Apparently, she didn’t note that the government is promising us they won’t do any of this. The authority the online speech cops appear to cite is the actually the U.S. federal government itself (lol). Not an entity exactly known to be a beacon of truth. 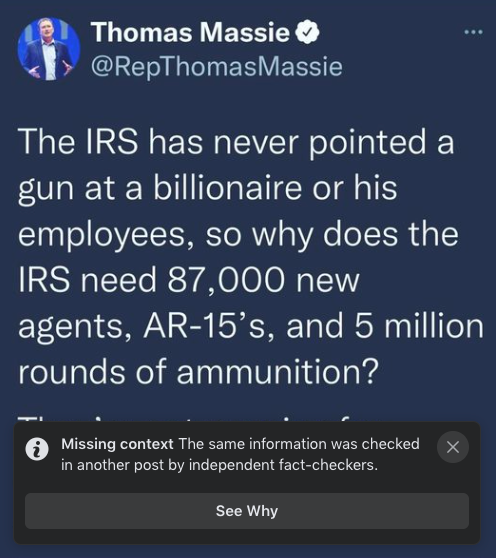 Here is a sitting member of Congress, representing his constituents, wondering aloud why the IRS is about to gear up in more ways than one.

This is basic political speech. But Facebook calls it misinformation apparently because it falls outside the government’s narrative.

This is mind-blowing in a country like the United States, where encouraging free speech, dissent, and challenging the government has been so crucial in shaping our still relatively young republic.

Here’s how some of the most important events and debates in American history MIGHT (<<< note this word, Facebook police) have been handled by today’s so-called fact-checkers.

He was a loving dad.
He also lied to Americans—for years—about the disastrous war he was getting them into in Vietnam.
How would Craig McNamara made peace with his father?
One way, for a while, was walnuts.https://t.co/URswrYoVTQ

Imagine some hippy in 1968 speaking out against the escalating U.S. war in Vietnam on his Facebook, only to have “Missing Context” pop up to warn his followers:

Facebook Warning: *Independent fact-checkers* have found that this and similar posts are missing context. The Pentagon and statements by White House officials have suggested that U.S. efforts in this conflict have been productive.

In fact, the war had been going south for many years before the U.S. government would admit it–and it was a whistleblower that forced them to do it.

While on that subject…

On this day in 2013, the first batch of NSA documents leaked by Edward Snowden to Glenn Greenwald was published in the Guardian, revealing that the NSA collects millions of Verizon customers' phone records daily. pic.twitter.com/wx73v2fXim

In 2013, when National Security Contractor Edward Snowden blew the whistle on the agency for illegally spying on Americans en masse, the government immediately responded that it wasn’t doing this. They said that no illegal surveillance was taking place.

President Barack Obama promised time and again this wasn’t true. The Director of National Intelligence James Clapper previously testified before Congress that mass collection and surveillance of Americans’ data was not taking place (his lie is what prompted Snowden to come forward.)

‘We have to end this mass spying on U.S. citizens. It is unconstitutional and un-American.’

Facebook Warning: *Independent fact-checkers* have found that this and similar posts are missing context. White House officials and the U.S. intelligence community have assured the public that there is no government program collecting the data of everyday Americans.

Before it was enacted in 1935, one of the arguments against Social Security is that many feared it might one day become a national personal identification.

So the government made clear on the original cards that it was not to be used for ID: 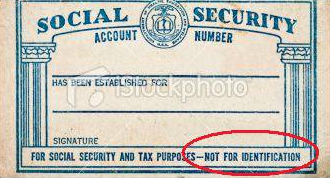 ‘I don’t trust the federal government to keep tabs on us all with this worker’s card – you know FDR’s going to make it into a national ID!’

Facebook Warning: *Independent fact-checkers* have found that this and similar posts are missing context. Roosevelt Administration officials have assured Americans that Social Security will never be used for the purpose of personal identification.

Barack Obama says Americans were wrong to worry "they would lose" their health insurance under Obamacare.

"If you like your health care plan, you can keep it" was the Lie of the Year in 2013. pic.twitter.com/QCGLgie5WJ

President Obama made two big promises in the lead up to the Affordable Care Act: Costs were going to go down and you could keep your health plan.

FACT: Nothing in #Obamacare forces people out of their health plans. No change is required unless insurance companies change existing plans.

Costs might have gone down for some but for many, they went up. The Obama administration’s “keeping your health plan” part was later called Politifact’s lie of the year.

‘I don’t trust this president, I want to keep my doctor and this government is only to make health prices go up!’

Facebook Warning: *Independent fact-checkers* have found that this and similar posts are missing context. Obama Administration officials have assured Americans that they will be able to keep their health plans and their doctors.

For skeptics of this column, some of these examples might seem silly and far-fetched. But with Facebook fact-checkers framing Hannah Cox, Congressman Massie and others’ questioning of a pending law in a way that comports with the official government line… it’s not far-fetched.

It’s happening right now. These few examples of what this might have looked like in the past are off the top of my head.

The COVID-19 pandemic kicked much of this “fact-checking” craze into high gear, and playing devil’s advocate, there are certainly good arguments to be made about wanting the public to make healthy decisions in such turbulent times (though using the Center for Disease Control as the exclusive guide turned out to be extremely problematic. In retrospect, someone needed to fact-check them. Daily.).

But now we can’t even question the IRS?

I am a free speech absolutist. Like the old school ACLU. I’m an actual liberal on this issue.

If Hannah or Rep. Massie said they were aliens sent from Mars by their god Zeus on a mission to prove the world was flat, they should be allowed to say it. We can all also have opinions on it. That’s how free markets work, even the market of ideas.

None of this is an exact science. Discourse is, by its nature, messy.

The spread of misinformation has been a societal problem since the beginning of human communication—but much of the spread of disinformation has been done by the government and politicians. Their word should hardly be the measurement by which “fact-checkers” evaluate content. Major communication platforms of our time insisting that the only public discourse allowed must follow government dictums and guidelines is something very new and troubling.

People spreading misinformation can be dangerous. Helping the government silence anyone who challenges it is infinitely more dangerous.