Speech that is allowed in the halls of government is being muted on social media.

On Wednesday, Sen. Rand Paul will hold hearings to investigate the potential origins of the COVID-19 virus that rocked America and the world for over two years. The pandemic might be the most defining event of our generation, as Pearl Harbor or the Vietnam War were for generations past.

In other words, it’s a big deal. Our own Hannah Cox wrote a column about it. I tweeted it.

Here is the warning that popped up: 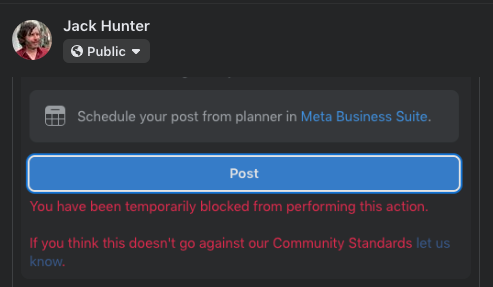 “You have been temporarily blocked from performing this action,” the Facebook alert read. “If you think this doesn’t go against our Community Standards let us know.”

“Let us know” included a link that presumably let you message the platform’s moderators.

I wasn’t about to encourage the folks at Facebook to put extra eyeballs on my page, considering the number of friends and colleagues who have been suspended or banned over the most mundane language in the recent past.

As an experiment, I also attempted to post a different story about the same subject, a Fox News story, on another page that I have admin abilities over. 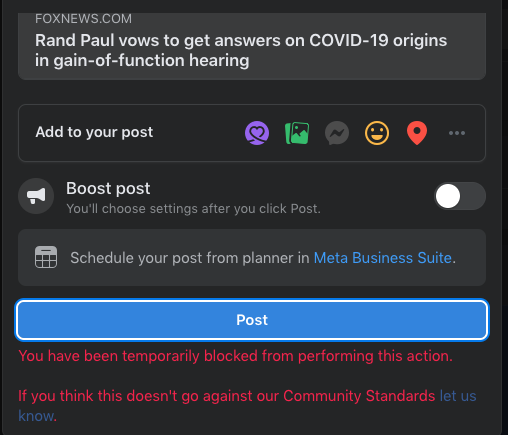 I assumed the words “COVID-19” and/or “gain-of-function” sent up Facebook’s red flags. Hell, maybe “Rand Paul” did too. “Fox News” scares some.

This is a problem.

While I can understand why any private mass platform would have concerns about “misinformation,” the definition of that by cultural elites and our Facebook overlords seems to have become information they merely disagree with or that’s disfavorable to their narrative.

Major platforms used to claim that the CDC or government standards on the subject of COVID-19 were their guide in policing information, but what government standard prevents Facebook from sharing a story about what goes on in Congress? That Facebook favors the Democratic half of the government that is usually in opposition to the Republican side Sen. Paul belongs to?

There is a hearing in Congress on Wednesday. Conducted by Rand Paul. About COVID-19 and its potential origins. The term “gain-of-function” will be used. The entire purpose of such a hearing is to find truth and facts.

And I can’t share a mainstream news story about it?

Major social media companies concerned about misinformation being a threat to democracy should also consider that an even greater threat might be to gradually stamp out the ability of everyday Americans to share information at all.