Nancy Mace is Leading the Fight to End US Support for This Horrific, Unconstitutional War

The libertarian-leaning Republican has helped create a bipartisan coalition calling for the end of America’s role in the Saudi Arabian war in Yemen. 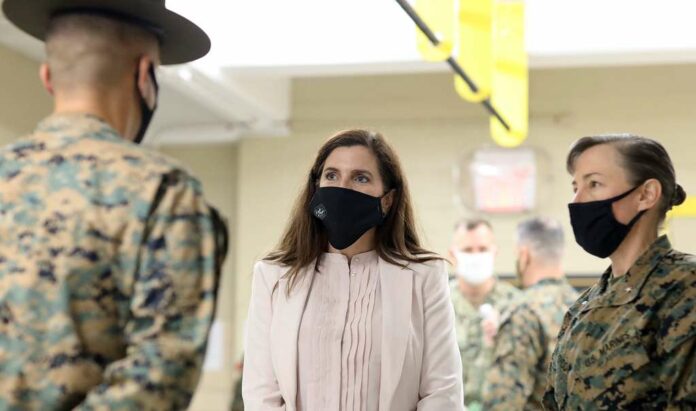 In early June, a bipartisan group of over 50 House members introduced a bill that would use the War Powers Act of 1973 to remove the United States from being involved in Yemen’s civil war.

Dozens of other Republicans and Democrats are co-sponsoring the bill, including libertarian Republican Rep. Thomas Massie and progressive Democrat Ilhan Omar.

SC Republican @NancyMace has emerged as a key congressional supporter of invoking the 1973 War Powers Resolution to demand that the Biden administration end US military participation in the Yemen war. Mace is working across lines of partisanship and ideology to end an awful war.

Massie has introduced similar bills for years, partnering with Democrats to demand a vote on the US’s participation in Yemen.

@RepRoKhanna and I introduced a resolution to force a vote on US involvement in Yemen war. The War Powers Act requires a vote within 15 days of introduction.

GOP leadership is preventing a vote by hiding language in a resolution for the Manage our Wolves Act. #cantmakethisup ! pic.twitter.com/cVuAebhV0T

He’s got a new ally in Nancy Mace.

Mace said on June 1, “The war in Yemen continues, sadly, to be an overlooked humanitarian crisis; it is imperative Congress rescinds U.S. support for this unauthorized military conflict and works toward peace on the Arabian peninsula.”

The Houthis in Yemen have been at war with Saudi Arabia for control of Yemen since 2015, with the US aiding and abetting the Saudi side of this conflict. Congress never declared war against the Houthis, yet US support has remained in place throughout the Obama, Trump, and now Biden administrations.

“While Houthi forces abuse those living under their corrupt rule, forcibly recruit child soldiers, and launch mortar shells and missiles into civilian areas, the U.S.-supported, Saudi-led coalition has also engaged in a consistent pattern of airstrikes targeting civilian objects and civilian infrastructure, including a school bus full of children, public markets, weddings, port docks and cranes, funerals, Doctors Without Borders hospitals and other medical facilities, camps for internally displaced people, and boats filled with African refugees.

These attacks have a direct correlation to the humanitarian crisis, as the destruction of such vital civilian infrastructure has directly hampered humanitarian and commercial import access to the country, which before the conflict imported nearly 90 percent of its food supply. Civilians have borne the brunt of this crisis, with an estimated 337,000 dead as a result of the fighting, starvation, and disease.

Despite progress in gaining humanitarian access to previous frontlines during the current truce, three-quarters of the population, nearly 20 million people, are acutely food insecure.”

Those backing the bill to stop US support for this war cite a provision in the 1973 War Powers Resolution that says military force “engaged in hostilities outside the territory of the United States… without a declaration of war or specific statutory authorization” must be removed by the president “if the Congress so directs.”

This group intends to direct. Senator Bernie Sanders is expected to introduce companion legislation in the Senate.

This fight is not new, nor is its bipartisan dynamic. In 2019, when the Senate voted to end the US-backed war in Yemen, you had both libertarian-Republican Senator Rand Paul making the same arguments about the unconstitutionality of that war as self-described socialist Sanders.

“The United States should not be supporting a catastrophic war led by a despotic regime,” Sanders said on the Senate floor three years ago. “This war is clearly unconstitutional.”

Trump vetoed that legislation in order to allow the US funding of the Saudis to continue. That’s right: Unfortunately, Trump was for continuing American involvement in that war.

Mace, meanwhile, has been outspoken against the US’s habit of going to war without a constitutional declaration for some time.

In June 2021, the congresswoman observed that every president since George W. Bush has cited the two-decade-old Authorization of Use Military Force (AUMF) as giving them the authority to use military action anywhere in the world at will without consulting Congress.

“Republicans and Democrats alike are responsible for this devastating loss of blood and treasure. The Bush administration got us into these wars, the Obama administration kept us in,” Mace wrote last June in the Washington Examiner.

She added, “Over a decade later, former President Donald Trump was the first to question why we were still there.”

Mace won a primary challenge on June 14th against a Trump-endorsed opponent. Throughout that race, Mace always claimed to be “America First,” particularly on foreign policy.

When it comes to ending US involvement in Yemen, one could argue that Nancy Mace might be even more “America First” on that issue than former President Donald Trump. Because US dollars could be better spent in other places—perhaps even inside the US—rather than on terrorizing impoverished Yemenis abroad in a conflict we should have never been involved in.

In the last few weeks, the Supreme Court has...
Read more