Some lawmakers in South Carolina’s state legislature have been fighting a David vs. Goliath battle this session, attempting to fully repeal the state’s corrupt Certificate of Need (CON) laws. And now, they just got an assist in the eleventh hour.

South Carolina Governor Henry McMaster came out in favor of the state fulling getting rid of its CON laws. This is significant as many in the healthcare industry and some lawmakers have been pushing for mere reform of the state’s laws instead of full repeal. It seems they recognize their crony scheme will not remain intact and are trying to push for reform over repeal so they can hold onto at least some of their special favors from the government.

McMaster isn’t having it.

He went on to say that he believes CON laws “have become antiquated and ineffective in today’s modern free marketplace” and that “CON stifles entrepreneurship, capital investment, and competition while limiting access and creating monopolies in South Carolina’s healthcare market.”

He’s got that right.

CON laws were put in place in the 1970s with the explicit purpose of limiting the supply of healthcare services. It was a form of government protectionism meant to shield industry insiders from competition so they could keep their prices artificially high.

In short, when a state has CON laws on the books, many healthcare providers have to go before a board and lobby for why they “need” to add another hospital bed, a new piece of equipment, or build a new hospital. Then their competitors get to come in and argue against them. It’s an overtly corrupt practice that favors conglomerates while pushing independent practices out of business, and again, it makes your healthcare vastly more expensive.

South Carolina’s CON laws are particularly bad. According to Americans for Prosperity, “these laws keep health care providers from purchasing new equipment, expanding their facilities, and establishing new locations without government permission — which can take years to gain, if it comes at all.” They also report, “the average time between an application and a decision is 134 days, with some cases taking over a decade if they’re contested by a competing provider.”

These laws literally get people killed in this country every day.

So why would anyone fight to keep them? It’s simple. Large healthcare companies pad the pockets of many lawmakers, and lawmakers then turn around and do their bidding. There is every reason for healthcare providers to want to shield themselves from competition. But that simply wouldn’t be possible without big government creating crony deals.

Read my lips: this is not free-market capitalism.

South Carolina’s state senate passed full repeal of CON laws earlier this year, but it remains to be seen what the house will do. It’s coming down to the wire this week, and we can only hope the governor’s words are heeded.

As McMaster went on to say in his letter, “We have seen the CON approval process become weaponized by those seeking to halt competitors’ entry into the marketplace through lawsuits and long drawn-out litigation. This practice has the practical effect of delaying healthcare services in rapidly growing areas of our state, it provides no incentive for capital investment in our rural counties, and it provides no relief to our citizens from rising healthcare costs.” 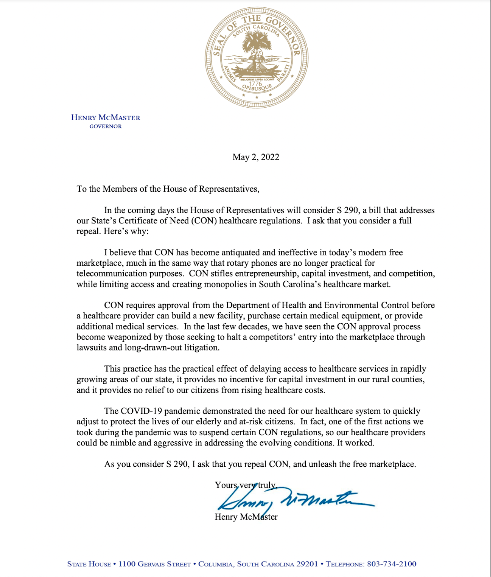