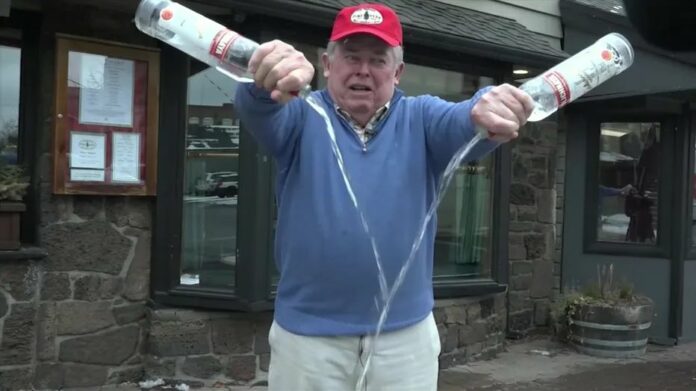 Russia is over a week into its assault on the Ukrainian people. It’s a disgusting act of war that is creating a humanitarian crisis and it should be universally condemned. But it is important to remember that the people of Russia are not waging war against Ukraine—their corrupt leaders are. So why is there so much backlash right now not against the Russian government, but against Russian people themselves?

Russians have little to no say in what their leader, Vladimir Putin, does. They live in a fake democracy that regularly imprisons its own people over even slight criticisms of their government and they are governed by a psychopath. And, even despite that, thousands of Russians have been risking their lives to protest the war in their own country.

With this all in mind, many of the actions taken against Russians or people of Russian descent in response to the war make little sense. Does it hurt Putin if his people suffer? Hardly. They’ve been suffering. Some punitive measures will merely further harm the Russian people who are already poor and oppressed, which could actually make Russians more sympathetic to their leaders’ crusade against the West.

Let’s look at the 5 most ridiculous instances of backlash against Russian people we’ve seen lately.

While the Russian people have little control over the actions of their government, Russian cats certainly have even less. But that didn’t stop the International Cat Federation from banning them from international competitions.

Leaders of the organization said they simply could not “witness these atrocities and do nothing.”

We’re unsure if anyone has broken the news to Putin yet or how he will ever recover from this devastating blow. But this is certain to have major ripple effects in the cat pageantry industry, hurting innocent people and adorable cats who have no culpability or control over the invasion of Ukraine.

Russian participation at Seafood Expo Global in Barcelona has also been canceled.

A statement on their website reads, “Due to current international situation organizers of Seafood Expo Global have to cancel the participation of all Russian companies in the event. Thus, this year there would be no Russian exposition within the exhibition which will take place in Barcelona in April 26-28.”

It should go without saying that the fish did nothing wrong. We fail to see how canceling codfish will do anything other than hurt the fisherman who would have participated in this exchange, but, they tried it. Something tells us that this won’t even make Putin’s radar, let alone impact his decisions, and will just stigmatize and discriminate against Russians for no real reason.

3. Threats Against Russian Restaurants in America

In the US, some Americans are taking their frustration with Russia out on random Russian restaurant owners in their communities.

The owner of a San Diego Russian restaurant, Pushkin Russian Restaurant, told CBS News he has been receiving threatening and hateful messages, with some even threatening to blow up the joint. Ike Gazaryan isn’t even Russian, he’s Armenian, and the restaurant happens to employ several Ukrainians. None of the people threatening this business seem to have even done basic homework about the place.

And in New York, the Russian Samovar Restaurant says they’ve lost 60% of their business due to the conflict. The co-owner of that spot is also half-Ukrainian.

These boycotts and harassment campaigns are silly and do nothing to hurt Putin. They just hurt business owners from the region, most of whom are publicly standing with Ukraine in the first place—and none of whom have any culpability in or control over the invasion.

Anna Netrebko, a famous Russian soprano, will no longer be able to perform at the Metropolitan Opera in New York City this season.

According to the Met, she refused to publicly distance herself from Putin.

But interestingly, Netrebko has issued criticisms of the war. She just hasn’t gone after Putin directly, a move that could lead to the persecution of any family or friends she still has in Russia.

We know opera houses aren’t filled with rocket scientists, but come on guys. Put two and two together here, and don’t punish a random Russian woman for the actions of her home nation’s unelected government.

5. Pouring Out Russian Vodka or Banning Its Sale

Some American restaurant owners are defying Putin by pouring out Russian vodka… that they already paid for. That’ll teach him a lesson!

Bars and stores are pulling Russian vodka from their shelves, or pouring out bottles all together. Read more: https://t.co/yEu9ulPhBL pic.twitter.com/dmVpuexXRM

Businesses or individuals pouring out their Russian Vodka is as if the Sons of Liberty had brought their own tea from their houses and thrown it into the harbor the night of the Boston Tea Party.

You’ve already bought it…might as well drink it. You are not hurting Russia. pic.twitter.com/JAzzqltP8l

To make the situation even more silly, most Russian-branded vodka isn’t even made there. Stoli Vodka, as one example, is made in Latvia and the company’s headquarters are in Luxembourg.

But that hasn’t stopped politicians in Utah, Ohio, and New Hampshire from calling for the removal of Russian-branded products.

People are right to want to fight injustice. But these actions only hurt more innocent people.