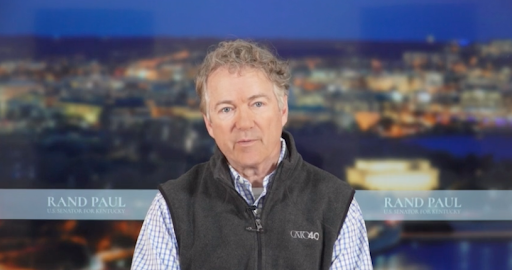 “Tonight you heard a speech by someone who doesn’t know what’s going on in the Union,” Paul began. “Or is at least hoping you don’t know.”

The Republican senator surveyed some of the primary issues the United States is facing.

“What is the state of the Union?” Paul asked. “Russia’s invasion of Ukraine has led to the worst crisis in Europe since World War II.”

“Massive inflation is everywhere, the likes of which we haven’t seen since the malaise of Jimmy Carter” the senator added.

The libertarian-leaning Republican observed, “Everyday Americans see their freedom, jobs and livelihoods stolen from them by petty tyrants drunk on power with lockdowns and mandates.”

“The state of the Union is frankly pretty poor,” Paul insisted. “And Americans are largely unhappy with Biden’s performance.”

Paul cited the prolonged COVID-19 lockdowns, the “ballooning” national debt, and runaway inflation as reasons for Americans’ widespread dissatisfaction with the Biden administration.

Or, as Paul demonstrated with a graph:

Paul emphasized that increasing food, gas, and other basic daily items rising in price is a real problem for working families.

The senator also stressed, “Economic issues are only part of the problem, though. Parents are being told they’re not in charge of their kids’ education. Issues such as critical race theory and extreme gender are brought into their small children’s classrooms.”

“That’s if their kids are even meeting in person in a classroom at all,” the senator added.

Paul said that Biden claims he has merely “followed the science” regarding COVID restrictions and mandates, but it “looks more like political science to many of us.” Many have noted that the recent end of mask mandates at the White House and in blue states and cities has curiously corresponded with the eve of the State of the Union address and the upcoming midterm elections.

“We can get our spending under control,” he declared. “We can retake our freedom. We can stop the left from overtaking our schools, and we can fix our foreign policy.”

“Our state of the Union can and will bounce back,” the senator said.