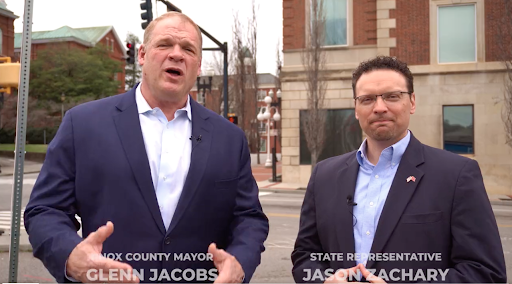 On Monday, Knox County Mayor Glenn Jacobs and Republican state representative Jason Zachary announced they are personally donating $5,000 each to fund a lawsuit filed against the county’s board of education. The purpose of the lawsuit is to end a court-enforced mask mandate in Knox County Schools.

Mandatory masks are bad for our children, plain and simple. When every child is forced to wear a mask, we’ve seen children delayed in their speech and emotional development. That's why we're helping end the Knox County Schools' mask mandate. https://t.co/xNIbL1Dr8l pic.twitter.com/F1ETuD4e9l

“Knoxville County schools have been under a universal mask mandate for five months as the result of a federal preliminary injunction that overturned the will of our locally elected school board,” Jacobs said in a video he shared on social media. “Now, a group of Knox County parents are filing their own lawsuit in federal court to overturn this order, and they have retained one of the top firms in the country who has argued these COVID cases around the country.”

Meet Harmeet Dhillon, Knox County parents' attorney in the new suit to end the mask mandate. Glad to have you on the team, @pnjaban!#freethesmiles https://t.co/POIfTX0CvW

“And it’s time for it to stop,” Jacobs declared.

“Of course, suing the school board is not our first choice, but it’s the only way to get the case heard at this point,” the mayor told local news outlet WATE.

“Jacobs and Zachary say they are not plaintiffs in this suit,” WATE reported. “They are helping to financially support the case with private money, meaning that no taxpayer funds are involved.”

WATE noted, “Masks have been required in Knox County Schools since September 28, 2021, when Judge Ronnie Greer said the school system must enforce the same mandate that was in place during the 2020-2021 school year. The ruling is a part of an ongoing lawsuit against Gov. Bill Lee and Knox County filed by the parents of three Knox County Schools students claiming their children are ‘unable to safely attend school without increased risks of serious injury or even death, unlike their nondisabled peers.’”