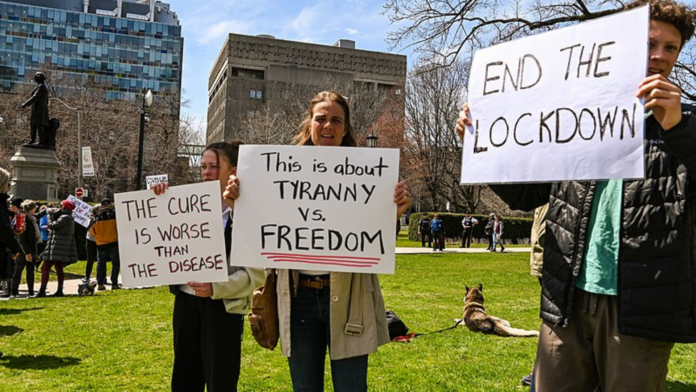 Now almost two years since the COVID-19 pandemic began, and after $6.6 trillion in total federal spending on it—the equivalent of $51,600 per household—some policymakers want to pass yet another so-called COVID-19 relief package.

Not only has Congress already spent more than it should have, some of the previous COVID-19 relief spending is actually hurting our economy today by adding to problems like rising costs, supply chain problems, and an unprecedented labor shortage.

The following are nine reasons why Washington should not enact any more COVID-19 spending.

If policymakers enact any further COVID-19 spending, it should come exclusively from already authorized funding, including more than $200 billion in unspent health funds.

2) Hurting Business: Businesses need less government intervention, not more. Potential new spending would likely be conditional on metrics that encourage COVID-19 policies and restrictions that actively make things worse for businesses, such as vaccine passports and vaccine mandates (for a vaccine-resistant variant of COVID-19), school closures, mandatory asymptomatic testing, and lengthy isolation periods, including for individuals who have merely come into close contact with someone who has COVID-19.

According to the National Federation of Independent Businesses, only 5% of businesses said that either “poor sales” or “interest rates and finance” were their most important problem in December. Far more listed factors that government policies have made worse, including 10% saying government regulation, 14% listing taxes, and 22% citing inflation as their biggest problem.

3) Inflationary Effect: It could also exacerbate inflation. Deficit spending financed by the Federal Reserve would further add to inflationary pressures that have hurt consumers’ pocketbooks and resulted in real wage declines. Furthermore, many of the specific policies that could be included would reduce the supply of labor, goods, and services, which would push prices even higher.

4) Labor Shortages: It will add to the labor shortage. Paying people not to work is a big reason why there are 2.9 million fewer people working today than there were prior to the pandemic—despite there being 3.6 million more job openings today.

With more than 1.5 jobs available for every unemployed worker, we need policies that will encourage people to take jobs instead of adding more missing parts to already fractured supply chains and further contributing to shortages and rising prices.

A lot of that came from the incredibly problematic $600 per week bonus unemployment benefits that became widely available without sufficient eligibility verification. Consequently, a Heritage Foundation analysis estimated that at least 40% of pandemic unemployment benefits—$357 billion in total—went to people who weren’t actually unemployed. Other COVID-19 program expansions were similarly exploited, to the detriment of taxpayers.

6) Winners, Losers: Picking winners and losers is ineffective and unfair. Some policymakers are talking about providing additional federal taxpayer dollars to targeted industries, such as restaurants, gyms, and live entertainment venues.

While some businesses have been more adversely affected than others, the impact is not universal across the U.S. Federal lawmakers have the least knowledge and wherewithal to meet the unique needs of communities, individuals, and businesses across the U.S. Consequently, federal funds often fail to deliver the intended results.

For example, Congress provided $54 billion in emergency child care funds over a little more than a year. That’s more than the revenue of the entire child care industry in 2019. As of December, 20 states haven’t been able to spend more than half of those funds, including 13 states that have spent none of them.

It’s not that there aren’t child care needs—including a lack of providers, a shortage of child care workers, and ongoing COVID-19 restrictions intermittently shutting down care—it’s that funneling federal money through multiple layers of bureaucracy fails to meet those needs.

7) Mask Giveaway: Sending masks to households is a day late and a dollar short. It might have made sense, as some policymakers now want to do, to send N-95 masks to households at the start of the pandemic, in 2020, but that would be wasteful and ineffective now.

The 500 million COVID-19 tests that President Joe Biden announced he was purchasing more than three weeks ago aren’t expected to reach households for weeks or months. Similarly, N-95 masks would arrive well after the current Omicron variant surge, and in the meantime, the federal government’s massive purchase orders could drive up the cost of, and limit access to, N-95 masks, just when Americans need them most.

N-95 masks are already readily available for fast delivery to households at just over $1 per mask. At that rate, it should cost only about $400 million—a mere 8% of the proposed $5 billion—to send three masks to all 128.5 million households across the U.S. The rest will presumably be spent on things such as enlisting the Postal Service, public schools and libraries, and transit systems to aid in mask distribution.

Factor in the reality that even amid the current Omicron surge, more than 30% of Americans are choosing not to wear masks in public, and that means many of these masks will end up in the trash.

8) Education Deprivation: Kids have suffered enough because of COVID-19. Nearly 50 million children in K-12 public education in the U.S. have experienced unnecessary lockdowns, subpar virtual learning, and social isolation as a result of COVID-19 restrictions. Many will experience lifelong consequences, including significant mental health declines and lower future lifetime earnings.

And yet, they will be asked to bear a greater debt burden than any generation before them. Already, children today will face a $1.3 trillion annual cost (in today’s dollars) of interest on the debt two decades from now, when they are working. That’s $8,600 per worker per year just on interest. We don’t need more money that could subsidize school shutdowns and that add even more to kids’ future debt burden.

9) States’ Role: Biden said COVID-19 will be solved by the states. On Dec. 27, he said, “There is no federal solution. This gets solved at a state level.” That’s an apt recognition because, to the extent that COVID-19 can be solved by government, the states are better equipped and in a better fiscal position than the federal government.

According to the Committee for a Responsible Federal Budget, states have neither spent, nor committed about $125 billion in federal COVID-19 relief funds. Meanwhile, states’ tax revenues were up by $147 billion (a 17% increase) through the 3rd quarter of 2021, compared with the same period in 2019. Throwing more federal dollars to the states would be a waste of taxpayers’ money and could be used to support unnecessary school shutdowns and economic restrictions.

Instead of wasting more federal money and exacerbating the consequences of existing COVID-19 “relief” and restrictions, policymakers should be looking for ways to ease current struggles with supply chains, labor shortages and rising prices by first removing government-imposed harms—not adding new ones.

This article originally appeared at The Daily Signal.