Sorry Nationalists, Libertarianism Can Be Populist, Too 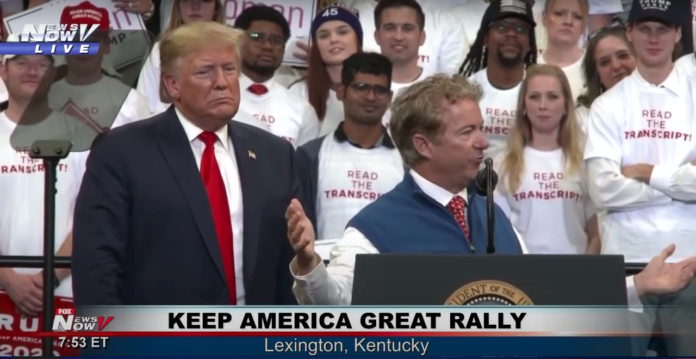 Populism means different things to different people. In the current political environment, many use it to describe former President Donald Trump and his “Make America Great Again” movement.

But that is too narrow a definition. What was the Tea Party movement a decade ago, if not a populist movement? The Bernie Sanders movement on the Left was populist. Occupy Wall Street was populist. The Ron Paul movement was populist. Civil rights leader Jesse Jackson’s 1988 presidential campaign has always been described as populist.

In the simplest terms, populism means the little guy against the big guy. It’s the grassroots taking on the establishment. It can come in left-wing or right-wing forms. Populism can encompass different issues.

I spent the beginning of the Biden administration explaining in length at The American Conservative why a new libertarian populism might be the best coalition moving forward for the Right in the U.S.

Much of my analysis from March suggested continuing where Trump left off: maintaining a war-averse “America First” mentality within the base, pushing criminal justice reform like Trump’s ‘First Step Act’, revisiting the Tea Party’s distrust of big government in today’s COVID-lockdown-resistant environment, battling cronyism, decrying an increasingly censorious Big Tech, stomping out wokeism, and perhaps Republicans messaging to minority communities better given the gains Trump made with those voters in 2020.

Unlike nationalist or “post-liberal” conservatives who often recommend more central planning and right-wing social engineering to combat left-wing big government, a libertarian populism would stick to the plain, old-fashioned limited government philosophy that has long defined the popular American Right.

Basically, we need fewer Republican senators like Josh Hawley and Tom Cotton, and more like Rand Paul and Mike Lee.

The Spectator’s Grayson Quay penned an article on Friday about the proper definition of the slang word “based” as it relates to our publication, BASEDPolitics. BASEDPolitics is proudly an outlet for conservative-libertarian opinion and news, during a time when nationalist conservatives have fetishized bashing libertarians.

Which is exactly what Quay’s piece was about, as nationalists poked fun at co-founders Hannah Cox and Brad Polumbo for daring to use the word “based” and associating it with their own libertarian brand.

Quay wrote, “Polumbo told me he’s fully aware that he’s going against the usual meaning of the term: ‘While not our only mission, a crucial part of our project is to explicitly combat the nationalist conservative movement in a substantive and ideas-based way. We are redefining what it means to be ‘based,’ whether they like it or not. Freedom is based. Catholic integralism and other forms of lite-theocracy are authoritarian and un-American.”

Polumbo is correct, but moreso, I have tried to explain integralism—the belief held by some internet nationalists that we need an explicitly Catholic, theocratic government—to a few regular Republicans, and most thought I was kidding, drunk, or both.

Quay offered the flipside to Polumbo’s sentiments, “The post-liberal response, of course, would be that right-libertarianism, like progressivism, is a dominant ideology masquerading as a scrappy resistance. They are two faces of the same beast called liberalism. They divide the world between them: freedom in the boardroom and freedom in the bedroom.”

Quay’s next observation is what prompted me to write this column.

“I’m not nearly the libertarian Polumbo is, but I’m not a fully convinced post-liberal yet either. I think wokeness is a far greater threat than socialism,” he wrote, sympathetic to both sides and the ideas each espouses.

“At the same time, I worry that any sort of post-liberal political project could lead to tyranny,” Quay continued. “The levels of social conservatism and, frankly, religiosity it demands simply don’t have enough buy-in to win national elections.”

Grayson’s next observation is something I have often repeated, that most Americans are probably more like popular podcaster Joe Rogan than some hard Right or Left imagined archetype.

Quay explained, “Imagine the average Joe Rogan listener. Not the alt-right white nationalist monster sketched out in thinkpiece after thinkpiece, but the representative of the American median, the ‘barstool conservative.’”

“He’s economically agnostic, an admirer of entrepreneurship who distrusts large corporations,” Quay continued. “Socially, he’s slightly to the left of center. The idea of giving puberty blockers to kids freaks him out, but he has no interest in outlawing gay marriage or no-fault divorce.”

Quay observed, “Polumbo and Cox are betting that this voting bloc will be more open to Friedrich Hayek than to Thomas Aquinas. Their plan seems to be to stan capitalism while casting wokeness as a collectivist distortion of individual liberty rather than its natural outgrowth. It’s possible, they promise, to combat the excesses of progressivism — to be ‘based’ — without throwing out many of the fundamental assumptions of American politics and culture.”

Writers and intellectuals Right and Left can entertain themselves with all sorts of ideas, usually the more radical, the more exciting. In my youth, I ran with a fringe group of academics who wrote many words convincing themselves and others that the American South would re-secede from the United States and form a more conservative country than the remaining parts. How radical! How exciting! As I became older, I realized how stupid it was.

There are quite a few folks on the Right who have convinced themselves that conservatives, among a number of items, should explore right-wing socialism, promote bans on pornography and other speech and behavior, and perhaps even replace the U.S. Constitution with the Catechism of the Catholic Church. If this sounds like I am flippantly characterizing post-liberal conservatives’ positions, you should see how much respect they pay to the true definitions of “capitalism” and “libertarian.”

These ideas can be exciting, regardless if they are desirable. But where is the constituency for them? How many MAGA-hat-wearing folks would actually want these things? How many independents, and increasingly, racial minorities who find wokeism toxic, would even take some of these post-liberal fantasies seriously?

Per Quay’s observations, Joe Rogan is the most popular podcaster in the country because many Americans identify with his brand of ideas and sentiments. Rogan was a Ron Paul guy. He was also a Bernie Sanders guy. What is that, even?

Just like few predicted the rise of Donald Trump, what happens next in U.S. politics on the Right could go in a more libertarian direction just as easily as it could head in a nationalist or some other direction.

I don’t know. I will promote my preferences. It’s all any political writer can do and the reason Based Politics exists.

Conservatives of all stripes should argue for what they believe in. Yet nationalists who pose as arbiters of what the future holds should not only stop taking themselves so seriously, but start worrying if actual voters will ever take them seriously.