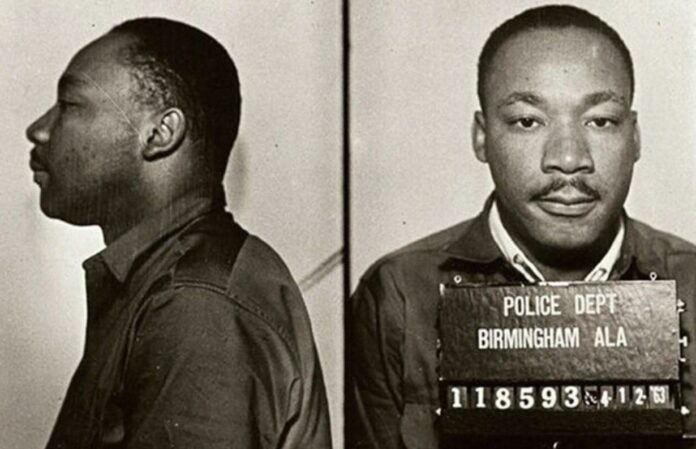 One of the most popular, yet simultaneously most ignored quotes from the legendary Rev. Martin Luther King Jr. is “One has a moral respon­si­bil­i­ty to dis­obey unjust laws.”

The famous remark is an excerpt from King’s “Letter From Birmingham Jail,” that he wrote to his fellow clergymen who criticized his methods of protest. King had been arrested following a non-violent demonstration. Marches, boycotts, sit-ins, and other forms of peaceful non-compliance to protest racial segregation were long utilized by King and other civil rights leaders.

”I am in Birmingham because injustice is here,” King stated simply.

Well, you would think it would be that simple.

As not only an activist but a reverend, King felt a moral obligation to fight against state-sanctioned inequality. Americans in general appreciate this sentiment without putting it into practice. While King’s words are widely shared on social media and taught in classes to remind us of the struggle that he and other leaders endured in the Civil Rights Movement, we have failed to listen to the core message.

Although we have succeeded as a nation in ending Jim Crow laws, we have yet to end many forms of government-enforced discrimination and tyranny. Today, black Americans still disproportionately face the brunt of tyrannical laws. We are arrested for and convicted of marijuana crimes at a higher rate than our white counterparts, despite virtually the same levels of marijuana usage.

There is stricter gun control employed in heavily black cities, despite the long history of black people needing to protect themselves using their Second Amendment rights. In fact, “gun control was almost exclusively a Southern phenomenon” before the turn of the century, which was used to preserve anti-blackness in the region’s legislation. Of course, this leads to law-abiding black people unable to protect their homes and loved ones from skyrocketing crime in urban areas and enables the judiciary system to lock up thousands of black people who own prohibited firearms. In fact, King himself was a victim of such racially-motivated gun control laws.

So, where are the marches? Where are the public demonstrations of civil disobedience? What happened to all of those lessons based on King’s noncompliance in the face of oppression? I have a dream; that one day Americans will care about stomping out all forms of government oppression.

How Can We Better Emulate MLK?

While the fight against racial segregation was necessary and justified, we should not stop there. The moral obligation to disobey unfair laws, as King taught, extends past race to every facet of discrimination. This includes fighting against a government that forces people into making serious medical decisions to be able to eat at a restaurant, see a movie, or swim in the neighborhood pool.

‘But, I’m vaccinated,’ says a huge chunk of the United States. ‘This won’t impact me.’ So said some whites when it came to the fight for equal rights for blacks. However, true courage takes standing up for other people when they are being persecuted, not just yourself.

The non-black people who marched with King and others should be an inspiration to those who turn their noses up at standing with people who they are different from to protect their rights. James Reeb, a white southern preacher who marched in Selma and Montgomerywith King, gave his life for the cause as he was beaten to death by white supremacists. Vilola Liuzzo, another southern white activist, was murdered by members of the Ku Klux Klan, also in Selma, for standing up for black rights. We should look back on these heroes in history who died to protect other people, even if the laws on the books didn’t directly impact them.

The fight against tyranny and oppression isn’t one fought only by minorities, or the poor, or the unvaccinated. It is fought by people who truly want to practice what King preached.

As King said, injustice anywhere is a threat to justice everywhere. It’s time we all rise and follow in his footsteps to defend the modern-day victims of state oppression.

Olivia Rondeauhttps://linktr.ee/oliviaron
Olivia Rondeau is a conservatarian activist, writer, and commentator. Her words can be found in The Daily Caller, Timcast, FEE, and many others.