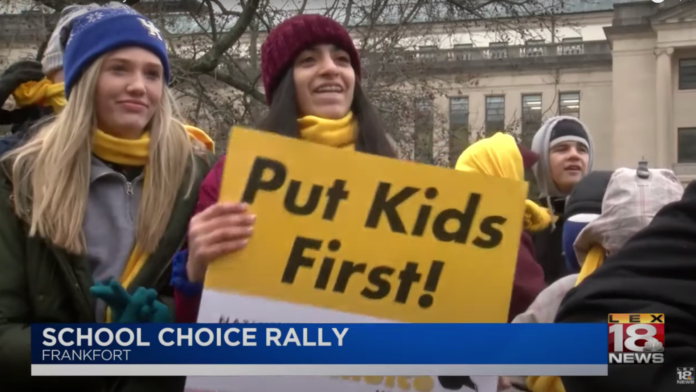 When it comes to the coronavirus, the risk to children has always been a statistical anomaly. But that doesn’t mean children have been safe during this pandemic. They have been under almost constant threat from governments, public sector unions, and public policy decisions that have stripped away their education, isolated them, and pushed those on the margins further into poverty, hunger, and domestic abuse.

Arguably, children have been one of the greatest casualties of the ghastly central planning we’ve all witnessed over the past two years, and unless something changes, there’s really no end in sight to it.

Beginning in 2020, teachers’ unions worked to shut down schools (and all their services) for reasons unrelated to the disease (again, kids have never been at great risk of COVID). Many demanded a grab-bag of pet-progressive-policy issues and worked to hold the education system hostage should they not get it. Among those demands were things like defunding the police, Medicare for All, and an increase in state taxes.

Recently, those same unions put on a gaslighting PR display, attempting to convince the public they never did these things. But it was short lived, as unions in some major cities decided to push for a second wave of closure this month.

Parents have finally had enough, and across the country bipartisan movements are rising up to fight back. It’s long overdue.

The pandemic exasperated the problems in our public school system, but for those paying attention, they’ve been present for some time. Falling IQs, a system that teaches to test, and a misuse of funds have been issues the school choice movement has been trying to call attention to for decades. Not only that, but it’s past time we quit trapping kids in failing government schools based off of their zip code. It makes no sense and condemns whole portions of our society to cyclical poverty. Talk about systemic racism, there’s nothing more racially-biased than our government school system.

Lawmakers across the country are introducing school choice bills that will give the power back to parents and ensure our tax dollars are no longer wasted or held hostage by these corrupt people who only care about their own pocketbooks.

One of those lawmakers is Republican Virginia House of Delegates member Nick Freitas who announced on Twitter that he would be carrying one of the most comprehensive school choice bills in the country this year.

I'm carrying one of the most comprehensive education freedom bills that has ever been submitted to the Virginia General Assembly.

HB 293 will fund students, not systems.

School choice usually follows something known as an “ESA” model, which stands for education savings accounts. Essentially, a portion of the funding per pupil (which is $15,000 per year per kid on average) goes into an account that families can then allocate on select education services. If they like their public school they can reinvest in it. If not, they can use their funds towards private schools, homeschooling, online courses, or tutoring. This would reintroduce competition back into the education market, give kids trapped in failing schools an exit route, and ensure our tax dollars actually go to kids and the classroom instead of administrators. Its common sense legislation.

In Virginia, the new governor-elect, Glenn Youngkin, has already signaled his support. In a recent interview he said he would support giving parents education savings accounts.

Vince Coglianese: "Would you be supportive of giving parents education savings accounts?"

Glenn Youngkin: "Yes, I would." pic.twitter.com/3VnLMSK4zk

Corey DeAngelis, who is the National Director of Research at School Choice Now (and a personal friend) remarked on the wave of school choice legislation across the country saying, “There will be no more hiding. Politicians from all parties will now have to consider the needs of families, not just the demands of the teachers unions. Politicians would be wise to side with parents going forward, because they care about their own children more than anyone else, and they’re now paying close attention. These parents are never going to forget how powerless they felt in 2020, and they’re going to fight to make sure they never feel powerless ever again. Parents are going to fight for the right to educate their children as they seen fit harder than anyone will ever fight to take that right away from them.”

The choice is simple. You either stand for children and their education, or you side with government bureaucrats working to protect their own power.