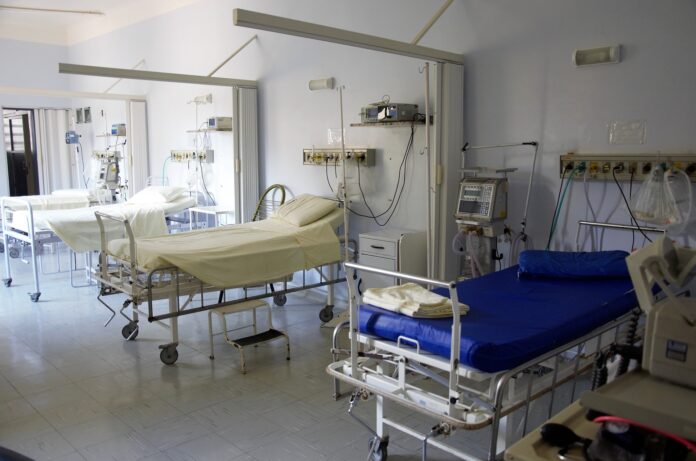 Hospital beds are again filling up across the country as America copes with another variant of the COVID-19 virus. Three quarters of intensive care unit (ICU) beds are occupied at the moment, and 28 percent of those are by COVID patients.

Furthermore, almost half of all states report their hospitals’ ICU beds have exceeded 75 percent capacity. And hospitals across the US report 75 percent of their general inpatient beds are also filled, with 13.4 percent of those being COVID-19 patients.

This is a big problem. Not only does that mean people with the coronavirus may be unable to access needed and timely care, it also means that individuals seeking assistance for other pressing medical issues may be severely delayed.

But, when outlets merely report that hospitals are at or approaching capacity, it neglects a key part of the equation. 75 percent of beds being full sounds scary, but people need to ask: 75 percent of what number of beds in the first place? 75 percent of 200 beds in a given region is a lot of patients; 75 percent of four beds is a different story.

In reality, it doesn’t take much for most hospitals to reach “capacity,” because their supply of beds is already severely restricted even before an emergency takes place. And the reason for that traces right back to government policies that make healthcare more expensive and harder to access for all. Let’s examine a few.

Many Americans are unaware of the presence of Certificate of Need (CON) laws. These laws are appropriately named because they are a total con: an arrangement between the government and large healthcare providers to limit competition and keep prices artificially high.

This is a textbook case of cronyism, which John Stossel defines as “the economic system in which the marketplace is substantially shaped by a cozy relationship among government, big business, and big labor. Under crony capitalism, government bestows a variety of privileges that are simply unattainable in the free market.” Cronyism is not to be confused with free-market capitalism.

Implemented in the 1970s, a total of 27 states still have CON laws in operation, and many of those states—like Alabama, Mississippi, and Arkansas—are the ones most strapped for hospital beds at the moment.

That’s because these laws arbitrarily restrict the amount of beds in a state, as well as the number of hospitals and other medical equipment. They do this by mandating would-be providers go before a board and show evidence of their need to add additional beds, equipment, services, and locations. At the same time, their competitors get to come in and argue against them, and often win out—especially when large hospital corporations (who are often in cahoots with regulators) are pitted against independent providers.

All of this means consumers have fewer healthcare options and higher costs for services.

Mitchell and his colleagues also found that states using CON laws to regulate healthcare have fewer hospitals, dialysis clinics, and surgical centers. And on top of all of that, even more studies show CON laws lead to lower quality of care, higher risks of complications after surgery, and even higher mortality rates for some conditions.

All of this was true and problematic long before COVID, but the pandemic exacerbated the pre-existing condition.

The government’s contribution to the healthcare shortage does not end with CON laws, though. It has also implemented policies and pushed practices that have led to a shortage in healthcare workers.

As one nurse in Tennessee, who spoke to me on the condition of anonymity, put it, “To be honest, the biggest problem we’re having is nurses to staff the beds. We say we are maxed out, but it’s usually more that we don’t have the staff to take care of the people rather than the physical space to put them.”

Why don’t hospitals have the nurses they need? Where to start.

Nurses unquestionably have one of the hardest jobs in the country—physically and emotionally. They work incredibly long hours, have to move heavy patients, are often abused by patients in distress, and deal with all of the grossest aspects of the human body. The pandemic has only added to that, and many have expressed feelings of despair and burnout for months.

They do all of this even while their salaries have been stagnating for some time.

Now, on top of everything else, they are being forced to make a choice between getting vaccinated or leaving their jobs. And many have decided enough is enough. Bloomberg reports 1 in 8 nurses say they will not take the vaccine.

As a result, 150 medical professionals were fired in Houston over refusals to take the vaccine. Shortly thereafter, Houston suffered a massive nurse shortage. Similar stories are cropping up across the country. At the beginning of the pandemic, nurses were touted as the heroes of the pandemic. Now that they’ve worked to bring us through the worst of it, they’re treated as disposable—an attitude that is expediting the exodus of many nurses. Reportedly 20 to 30 percent of frontline healthcare workers say they are considering leaving the profession.

It’s important to remember that the hospitals are largely forcing vaccines on their workers out of fear of liability and governmental pressure. But while they will insist these mandates are to keep customers safe, the science doesn’t actually match up. First, nurses have been exposed to COVID more than any other group, and many have built up natural immunity as a result. Secondly, data from the CDC shows vaccinated people can still get and transmit the virus, and that these people carry just as many particles of the virus in nasal passages and their throat as unvaccinated people.

Occupational Licenses and Other Provider Restrictions

Did you think we were done? Hardly. We’ve barely scratched the surface of all the ways the government has meddled in the healthcare market and blocked access to affordable care.

Up until the pandemic, states kept a whole hoard of crony regulations on the book meant to restrict supply, prevent competition, and keep prices artificially high. While many states have eased the enforcement of these laws since the pandemic began, their presence in the first place has still created barriers to care and the inability for the healthcare market to increase supply to the levels needed to address a crisis.

One of those regulation types is occupational licenses, which litter the healthcare sector more than virtually any other field. Often implemented under the mantle of public health and safety, all occupational licenses really do is ensure people have to pay the state to work. They often include expensive and time-consuming barriers to entry in a field, high fees, and the inability to take one’s skill set across state lines. On top of that, many arbitrarily exclude large numbers of the population from working in a certain field, or prevent people from fully offering the services they are trained in.

For one example, nurse practitioners must complete years of schooling and training. By all metrics they are more than equipped to handle the vast majority of issues that come before a general practitioner. But in most states they are prohibited from seeing patients unless they work under a doctor. Why? Because this prevents them from competing with doctors and keeps prices and doctor salaries high. There’s a massive shortage of general practitioners in the country, which could be quickly eased by widening the scope of practice for nurse practitioners—which would also free up the doctors’ time for more pressing matters. But cronyism stands as a barrier.

Another example of government policies that create supply shortages in healthcare are “ethical clauses” within occupational licenses. In many states people with a record are prohibited from obtaining such a license, permanently blocking them from employment opportunities in numerous fields. This not only prevents millions of Americans from rising, it also means important jobs go unfilled. When you consider all of the petty laws on our books and how easy it is for someone to transgress one of them, you begin to recognize how silly and unjust these laws are.

Lastly, in another example, doctors in Mississippi who wished to make house calls during the pandemic were blocked from doing so. Why? Because state regulators capped the number of licenses for home healthcare services in 1981 under the argument that no more would ever be needed.

Occupational licenses are a dirty scam the public keeps falling for. They aren’t in place to keep you safe (as if the government even could). They are in place to keep your healthcare prices high. And when a pandemic hits, that artificial restriction of supply also means you can’t access the care you need.

Another corrupt government regulation that blocks supply is telehealth restrictions. These regulations have impeded care for decades, and the government has worked hard to ensure existing providers were blocked from the competition telehealth could provide.

Though some of these restrictions were also eased at the beginning of the pandemic, the market can’t create the needed infrastructure to provide these services overnight, and so the industry has been operating from behind the 8-ball.

In conclusion, COVID is a crisis, and it is one we should all be concerned about. But we should also be aware that this is a crisis largely of our own government’s making.

When we allow the government to interfere with the market, as it has in healthcare for over a 100 years, it always leads to higher costs, less access, and lower quality: to the harm of the many and to the benefit of a privileged few. This isn’t capitalism, it’s cronyism—it’s important people know the difference.