It’s time to rush in. To stand up for others. To organize ourselves. And to ensure we continue to be a life raft for those seeking liberty. 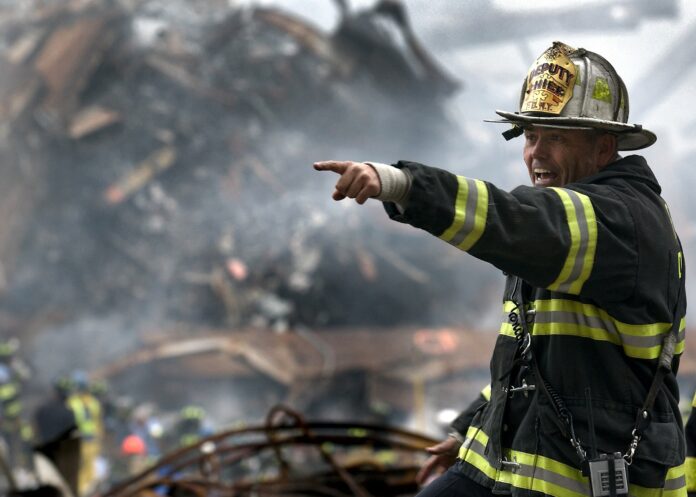 These images, and so many more, flood to mind at just the mention of 9/11. And 20 years to the date, they remain no less vivid for me.

I was in the Eighth Grade on September 11th, 2001. I wore a pale blue polo shirt, khaki pants, tennis shoes, and an ugly braided brown belt—the mandated uniform at the cottage school I attended two days a week. The school was in a small church outside of Louisville, KY and my morning study hall was monitored by a frightening woman we called Ms. Barbara. She mentioned a plane had flown into the World Trade Center that morning…and that was it.

There were no televisions in the church, and I did not know what the World Trade Center was at all. Unlike many, I did not watch the towers fall that day. Indeed, I didn’t even know we were under attack as a nation until my mother tearfully picked me from school and explained what had transpired.

I was not a worldly kid. Homeschooling had shielded me from many things, allowing me to grow up in a shiny, sheltered bubble (which I highly recommend). Due to that, it would take some time for me to truly comprehend that my world had just changed. That night, I only knew the attacks meant war. I worried my younger brother (who was 11) would one day be drafted to fight in it. I guess, even then, I somehow knew the war would go on for decades.

Over the next several years many other images joined those of the initial attack: Afghanistan, the military, TSA, terrorists, threat levels, the Patriot Act, Iraq. Images are important. Together they form our memories, and off our memories we form our narratives.

To me, these images told the following story.

America, shining beacon on a hill and perfect in all its ways, had been attacked by sinister and evil people who hated us for our freedom. They wanted to take away our rights and undermine our Constitution. But the US, the greatest country there had ever been, came together and unified to fight back. Thousands of our citizens went to fight for our rights, willing to die to defend our liberties and our way of life—willing to die to extend liberty to people who hated them even. And we would win, there was no way we could not win. We were the greatest country that had ever been on a righteous mission.

There was pride back then. So much national pride. And we were united as a country. We were the people who rushed in, who stood up for others, and who came together no matter our differences when our country was on the line.

Nowadays, many people talk about the process of deconstructing their faith. This is a painful and transformative process where individuals find themselves questioning everything they’ve been taught to believe in and realizing they not only do not hold to it, but often find much of it to be corrupt.

After college I went through a similar deconstructing process with my politics. I slowly began to realize that the politicians I supported, who claimed to be champions of individual rights, free markets, and limited government, rarely worked to uphold these things. I saw that my government was actually the biggest threat to my liberty, imprisoning more citizens than any other country in the world, spying on us en masse, and stealing from us every which way I looked. And I learned about our wreckless nation-building overseas—killing innocent people, funding terrorists, and destabilizing regions.

The images in my head of my country changed, and with them the narrative of 9/11.

I realized that much of the response to 9/11 by our government had been opportunistic and misleading. They took our emotions, our values, our love for our founding, and they used it against us. They used it to seize our civil liberties at home, to instigate unconstitutional wars, and to justify human rights violations that make a mockery of our core beliefs. They made us the bad guys.

For some time, I felt nothing but pure, righteous, seething anger towards my government. I didn’t feel pride in my country again for a long time.

Every year on 9/11 I watch old news coverage of the day, or documentaries. It’s how I like to remember the day and honor the dead. And I think part of me is still just searching, trying to make sense of all the ways that day changed our world and continues to impact our lives.

Due to this tradition, and my political work, I thought I knew all there was to know about 9/11, until a few years ago when I stumbled upon a lesser known documentary called “Boatlift: An Untold Tale of 9/11 Resilience.”

I was surprised to find it was actually narrated by Tom Hanks and immediately decided to watch it. The documentary tells an unfamiliar story from that September day: the largest water evacuation in American history.

We all know the stories of the heroic first responders who rushed into the burning towers, of the Americans who gave their lives to take down Flight 93, of the businessmen who, surrounded by flames from jet fuel, ran up to clear other floors.

But few know the story of how citizens with boats organized themselves to get 500,000 people to safety that morning. Hundreds of vessels—sailboats, fishing boats, cargo ships, even dinner boats— worked for over nine hours that day, answering a call from the US Coast Guard to come to New York Harbor and aid the evacuation. These citizen volunteers largely organized themselves and carried out one of the most successful maritime evacuations in history.

To give a better understanding of the scale of this operation, remember that 338,000 soldiers were evacuated at Dunkirk over nine days. These untrained Americans surpassed that number by over 160,000 in only nine hours.

This story bowled me over. It broke me. I sobbed and sobbed. It was the first time I felt proud to be an American again in quite some time.

They say the truth always lies somewhere in the middle. And it was in watching this film that I felt I finally landed on that truth when it came to the narrative of 9/11.

September 11th, 2001 was a horrific day that our government was at least in part responsible for thanks to our foreign policy and our intelligence failures. After it happened, our government used this horrific event to victimize many more people, both domestically and abroad. The terrorists meant to undermine our foundations by flying planes into buildings. Our government helped them accomplish this goal by using those buildings as an excuse to override our Constitution, as sure as they were piloting the planes themselves.

The image of the planes hitting those buildings is a permanent mental reminder of the ways in which we were attacked by both terrorists and our own government. But when I think about 9/11 I no longer think of the planes. I think of the boats.

Because the boats are who we as a people actually are. We are more than our government. We are 330 million diverse people who choose to come together every day to take care of and protect one another.

We have lost many things in 20 years. And as we now grapple with the pandemic it is easy to see our government replicating many of its opportunistic patterns from the early 2000s. It’s essential that we remember who we are right now.

It’s time to rush in. To stand up for others. To organize ourselves. And to ensure we continue to be a life raft for those seeking liberty.