Being Still and the Lord will fight for you

When I was 18 I was diagnosed with a generalized anxiety disorder. At that point, it was a welcome relief to have a name for the presence 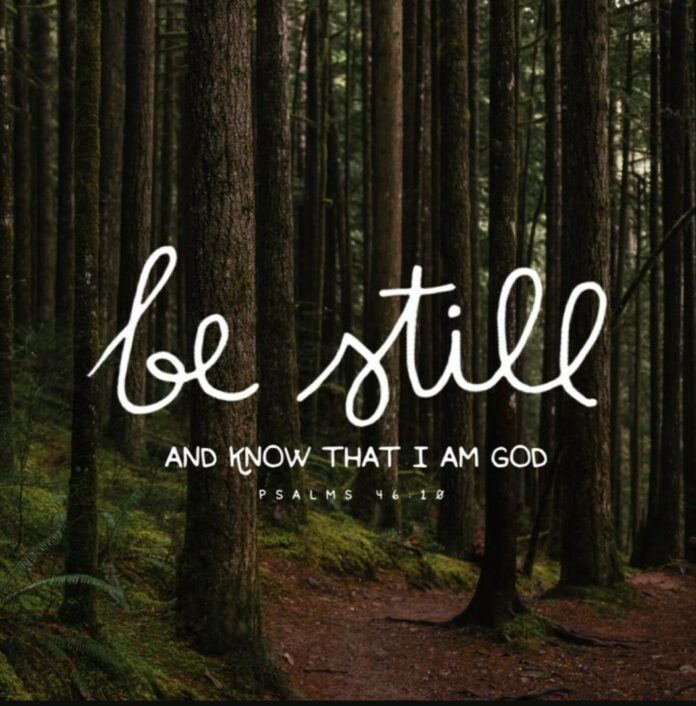 When I was 18 I was diagnosed with a generalized anxiety disorder. At that point, it was a welcome relief to have a name for the presence of something I had always known was there but couldn’t identify.

That was only 14 years ago, but our society has come a long way in our knowledge and acceptance of mental illnesses since then. At the time, I didn’t know anyone else who’d ever been to therapy. I was told, by some, that my disorder was the result of a spiritual problem, and by others that the stigma of it could hurt my future career prospects. Keep it to yourself, I heard over and over.

But after eight months in cognitive behavioral therapy, I felt better. Not healed, but capable of carrying the weight of my worry. And I also felt angry. Why hadn’t I been told there was help sooner? How come this was treated as anything other than a normal health issue? What would have happened to me if I hadn’t finally received treatment? A trait that would come to define me when faced with injustices emerged, and I decided I would speak out about my experience. Whatever repercussions I faced would be worth it if I could help others like me.

Of course there were no repercussions. There was an immense amount of curiosity, dozens of text messages from girls my age asking for the number of a therapist, and countless conversations where someone else finally got the chance to be open about their own experience.

I found the more open I was about my disorder, the more I felt in control of it.

Control is an important denominator when you deal with anxiety. Your mind is always taking in as much information as it can find to process, to analyze, and to determine potential threats from. The more information you can find, the better you can predict outcomes, and the greater the chance is that you can circumvent the negative possibilities, or at the very least, prepare for them.

It has been said that you die a thousand deaths when you have an anxiety disorder, and I think that is true. You not only imagine your own death, you imagine the death of everyone you love in a hundred different ways. Job loss, economic ruin, homelessness, apocalypses, affairs, you experience them all in your mind and even to an extent, in your body. The overstimulation these visions cause create real physical responses— a racing heart, sweaty palms, tears, weight gain/loss, hair loss, feelings of grief and bargaining, exhaustion.

There’s no cure for an anxiety disorder, but there are a lot of activities that can help to keep it in check. Exercise, meditation, spiritual practices, yoga, writing, breathing work, and cognitive behavioral therapies that involve talking yourself out of scenarios you made up in your head are all beneficial.

But still, there is the need for control, a driving desire to micromanage details, to think ten steps ahead at all times, to make contingency plans. At the root of anxiety is fear, a recognition of our own human frailty, and being able to take action — to seize control — is the antithesis to fear.

Here’s the problem with that though, control is a white rabbit we chase in a world gone mad. The desire to find and maintain control is really akin to the desire to play God, which is why the Bible tells us repeatedly to be still.

“Be still and the Lord will fight for you,” God told the Israelites in Exodus 14:14 as He led them out of slavery in Egypt and they feared for their lives in the desert. Over the next 40 years, their enemies would be vanquished, their needs provided for, and a path laid out that ultimately led them to the promised land.

“Be still and know that I am God; I will be exalted among the nations, I will be exalted in the earth,” God told David in the midst of war and trouble — a reminder to not fear in the face of threats but to rather remember who was fighting on his behalf.

“Quiet! Be Still!” Jesus commanded the wind and the waves as a storm at sea rocked the boat containing His disciples. When the storm calmed, He turned to his followers who were cowering in the corner and said, “Why are you so afraid? Do you still have no faith?” (Mark 4:39–41)

As many have pointed out in contextual studies of these passages, the command to be still is not a passive one. Rather it is a command to relinquish control, to cease our seeking to play God, and to trust that He will protect and provide for us. Furthermore, it’s a call on Christians to remember who their God is, to be in awe of his power and goodness. We should not fear, not because we are in control of the situation, but precisely because we are not and God is.

It is common knowledge that the object one focuses on expands in size. This is true in practice and in theory. When we are still and our focus is on God and His ability instead of our problems, the obstacles become smaller, the wind and waves calm.

And that brings us to our current situation.

The coronavirus epidemic has impacted us all in a myriad of ways, but across the board, it’s brought our lives to a screeching halt. No matter who you are, access to information is limited, control has never been further out of reach, and the majority of actions at our disposal have been severely diminished. Not only that but the stakes are higher. We’re facing economic disaster, an unknown future, and the very real threat of mass death. It isn’t just those of us with anxiety disorders feeling panicked at the moment. But if there’s ever been a time to be still, it’s now.

I got a “Be Still” tattoo nine years ago, an ever-present reminder of what I see as an ongoing practice in my life. It’s a habit of dying to myself, waiting on doors to open, and choosing to not give into fear or my disorder. Admittedly, I still fail at this frequently, and this past month it has been more difficult than usual.

Lately I fluctuate between two attitudes, gratitude and sheer terror, as I’m sure is true for many others. Even as I write I’m reminded of all of the ways God has already been providing for me during this crisis — job stability, the ease of working from home in my profession, the financial and geographic means to have everything I could possibly need delivered to my door, access to healthcare, my health itself.

But I also have my own hardships in this crisis. I just relocated to a new city a couple of months ago — a city that just so happens to be the epicenter of the pandemic in the United States. While I have a few good friends here, I’m without the network I’ve grown accustomed to over the past 12 years in Nashville, and I’m hundreds of miles from my family. Everything is unfamiliar here, and at times, daunting.

I’ve also been subleasing for the past couple of months, meaning I don’t have that much stuff with me right now. Being locked inside a 300 square foot apartment can feel like prison in and of itself at times, but especially without the comforts of home. On top of that, my sublease expires at the end of April. The idea (pre-COVID) was to find a long-term apartment this month and make the move permanent in May.

So I’m facing a lot of additional unknowns in the midst of an already opaque time. How much longer will we be quarantined? Can I even find a place to rent right now? Do I want to sign a lease and tie myself here if we’re going to spend a large percentage of the next year indoors? Should I put everything in storage and go home for a while? Where does God want me? I don’t have those answers, and I don’t know when I will.

But here is what I do know. God will provide, He has always amply provided for me.

Today is Good Friday, and I’m riddled with the symbolism it presents right now. Good Friday is the day of the crucifixion. For Christians, it is a reminder that all is not lost. On that dark day in history, it appeared death had won the victory, that the hope of new life had been dashed. The disciples were anxious (ok past that, they were literally in hiding), believers were in fear, the enemy was taking a victory lap.

But Sunday was coming. Three days later, on a day we mark with Easter, Jesus defeated the grave and rose again. His return meant the possibility of new life and the fulfillment of century old promises.

As we sit in our homes across the nation, we’re waiting yet again for death to be defeated, for the course of history to be righted, for the hope of new life. I think right now we’re being told to be still, to wait on promises to be fulfilled, and to remember who is fighting on our behalf. Be still, Sunday is coming.

Much ado has been made about House Majority Leader...
Read more
Economics

Is the US Still Waging War on Afghanistan?